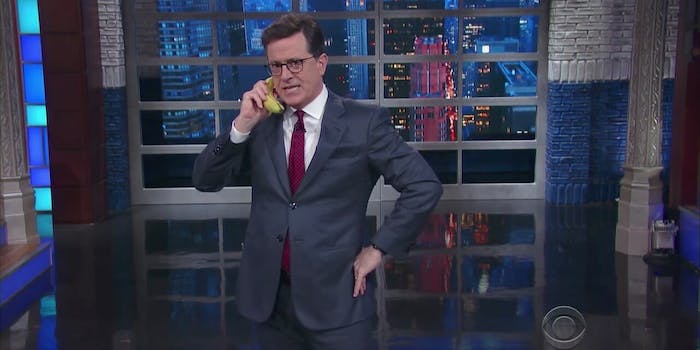 Stephen Colbert going after President Trump in his nightly Late Show monologues is nothing new, but his insults were on another level after he demeaned and abruptly ended an interview with a CBS colleague.

Colbert initially focused on some of the gaffes Trump spouted during a series of interviews he did to mark his first 100 days in office. However, he soon turned to an interview from CBS’ John Dickerson. The interview created headlines on its own once Trump suddenly ended it after he was asked if he still stood by his unfounded claims that Barack Obama wiretapped him. But Colbert was turned off as much as Trump’s insults to Dickerson himself.

Dickerson took those comments, including Trump calling Dickerson’s show “Deface the Nation,” in stride, but Colbert was not pleased.

“Donald Trump, John Dickerson is a fair-minded journalist and one of the most competent people who will ever walk into your office, and you treat him like that?” Colbert said. “Now, John Dickerson has way too much dignity to trade insults with a president of the United States to his face, but I sir am no John Dickerson.”

He then took to editing himself into Dickerson’s sit-down interview with Trump, making it slightly more cohesive—and much more honest—than the actual interview.

Colbert demonstrated just how not like Dickerson he was.