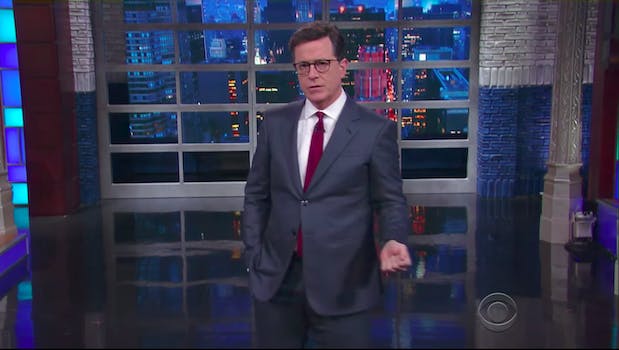 Both pro- and anti-Trump viewers are upset with Colbert.

Stephen Colbert has a long history of making jokes that cross lines and push boundaries, especially when it comes to his opponents. But now, some LGBTQ advocates are upset with a joke aimed at President Donald Trump that inadvertently attacked gay sexuality. And Trump fans are, too.

During his opening monologue for the Late Show With Stephen Colbert, Colbert referenced an excerpt from CBS’s Face the Nation, in which President Trump told host John Dickerson that he calls the show “Deface the Nation.” In response, Colbert made a joke implying Trump performs oral sex on Russian President Vladimir Putin.

“In fact, the only thing your mouth is good for is being Vladimir Putin’s cock holster,” Colbert exclaimed during his opening monologue.

The joke allegedly suggests Trump giving oral sex to Putin is demeaning or subservient in nature, because the punchline involves gay sex between two men. For Trump fans, Colbert’s joke is immediately controversial—it’s a sex joke about the president. But for LGBTQ advocates, the joke was immediately read as homophobic for inadvertently attacking a common gay sex practice as subservient, demeaning, or morally corrupt. Twitter users, both pro- and anti-Trump, turned to the Internet to complain about Colbert under the #FireColbert hashtag.

Colbert's homophobic rant was disgusting and we won't tolerate this anti-LGBTQ behavior.#FireColbert

Colbert explicitly mocks gay intimacy with the cover of mocking Trump. This is hate speech. Hate speech is hate speech, no matter the target

Over time, however, the #FireColbert hashtag gradually filled with more conservative and pro-Trump voices, outnumbering any LGBTQ criticism over the comment.

#firecolbert
He is so disrespectful to the POTUS. What's this type of monologue going to do to our country by next year. Fire him!!!

Some LGBTQ activists have called this hypocritical, noting that conservatives have largely turned a blind eye to homophobic and transphobic moves by the administration over the past 100 days.

All these leftist that hate Trump bc he said"u can grab them by the p", is now defending #FireColbert !! Unbelievable!!

Still, many LGBTQ activists are still upset about the joke, claiming it’s anti-queer in nature for criticizing Putin and Trump by calling them gay

This isn’t the first time Colbert has gained controversy for his sense of humor, either. In 2014, activist Suey Park started the #CancelColbert hashtag, after Colbert made a joke on Comedy Central that was criticized for disparaging Asian-Americans. LGBTQ activists have also complained about Colbert’s transphobic jokes in the past, which often used the terms “shemale” and “tranny,” and made fun of politicians at trans women’s expense.

“For instance, how many times have I accidentally picked up a tranny hooker at a truck-stop? I wanna say it’s in the 50s, but it could be higher. I guess what I’m saying is I’m nearsighted,” Colbert once said on the Colbert Report.