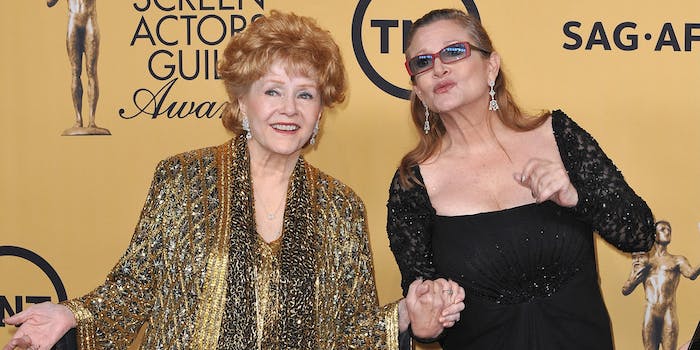 The two closed with a pair of duets you're going to want to see.

In the wake of legendary film actress Debbie Reynolds’ death, which occurred just one day after the passing of her daughter Carrie Fisher, fans are digging back to find some of the memorable moments they shared with each other.

Reynolds and Fisher appeared on The Oprah Winfrey Show in 2011, and throughout the course of the episode they discussed their relationship in length. It hasn’t always been an easy one: Fisher often felt like she would never escape her mother’s shadow, and Reynolds wanted to help Fisher as she struggled with drug addiction and mental health.

“I admire her strength and survival,” Reynolds said. “I admire that she is alive, that she has chosen to make it. It would’ve been easy to give up and give in and to keep doing drugs. I always feel, as a mother does, that I protect her. Who will do that when I’m gone?”

Fisher’s often complicated relationship with Reynolds was explored extensively in her work, including the semi-autobiographical novel Postcards from the Edge and her memoir and one-woman show Wishful Drinking. They didn’t speak for years, but they eventually became next-door neighbors, and they can joke about some of the hardships, including a few zingers at the expense of Reynolds’ ex-husband (and Fisher’s father) Eddie Fisher.

Here, on Oprah, the complexity and love in their relationship is on full display.

They ended the episode with a charming and wonderful duet of “You Made Me Love You” and “Happy Days.”

Their love and humor shone through whenever they appeared together, such as when Fisher honored Reynolds with the SAG Life Achievement Award in 2015.

Reynolds and Fisher will appear together in the upcoming HBO documentary Bright Lights: Starring Debbie Reynolds and Carrie Fisher, which explores the ups and downs of their close relationship for the past six decades. After their deaths, HBO Documentary Films president Sheila Nevins called it “a love story about a mother and daughter.”