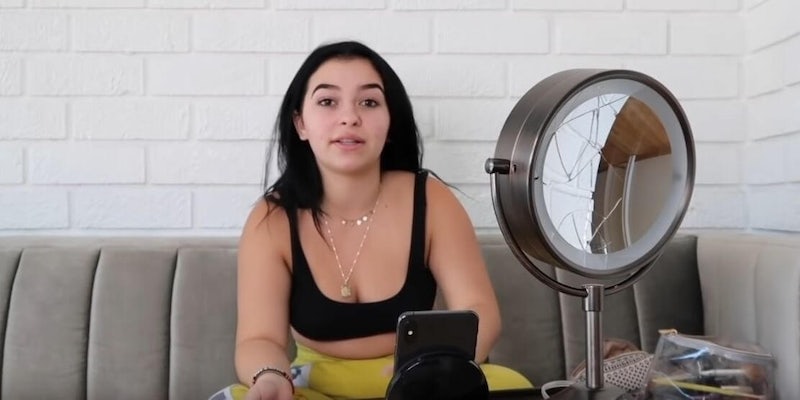 'I hope others around her wake up.'

The father of social media star Danielle Cohn said in a Facebook post on Tuesday that the YouTuber isn’t 15 years old as advertised. Instead, he claimed that Cohn—who recently took part in a hoax in which she said she was married and pregnant—is actually only 13.

In his post, Dustin Cohn wrote he wanted “to set things straight about my daughter Danielle Cohn” because he’s worried about her safety.

“Danielle is 13,” Dustin Cohn wrote. “I have never liked Danielle being on social media especially when she started at such an early age. But paegents (sic), and modeling, and then [Musical.ly] we’re (sic) all pushed on her. It was always a huge problem to me. I asked for it to stop immediately, which it didn’t. We found Pinterest boards with her photos and I told her mom I worried about pedaphiles (sic). We tried to take measures to stop it but it didn’t stop. The pictures now have gotten worse and worse. I am finally saying something on social media because people need to be held accountable.”

Cohn said he blamed social media companies, presumably Musical.ly (which is now TikTok), Instagram (where she has amassed 3.7 million followers), and YouTube (1.4 million subscribers). On YouTube, she writes that she’s 15.

“I want these companies to be held accountable because they never did their due diligence in checking my daughter’s age and have used a minor for profit because the money is more important than the truth,” Dustin Cohn wrote. “The exploitation of children on these sites needs to stop. If that means I have to be that person, I will come out and show the disgusting truth.”

Cohn wrote that he’s contacted Instagram and YouTube to tell them her real age but he said they ignored him because “they made money off exploiting my daughter.” He also said he’s contacted the California state government to complain about child labor. In his post, he continuously blasted Cohn’s mother for not contacting him about Danielle’s employment and for not allowing Danielle to visit him. He also ripped his daughter for the way she apparently treats Dustin Cohn’s mother.

“She may be my daughter but she has been brainwashed and makes terrible decisions that I cannot change,” Cohn wrote.

I have decided to set things straight about my daughter Danielle Cohn. For years I have done the diplomatic thing while…

In her response on Instagram, Danielle Cohn thanked her father for not being there and wrote that “you laid out lies and spoke about me as an enemy would.” She wrote, “Growing up without a biological father is the best thing that could have ever happen (sic) to me … My mother played both roles, and I couldn’t be more proud of her. I hope that one day I’m at least half the woman that she is and twice the parent you could ever be.”

Cohn also wrote that her dad “must be high, time for you to go to rehab, you are completely delusional.” Danielle Cohn, though, did not mention anything about her real age.

She also recently faced controversy when she admitted that her four-part YouTube series, where she said she was pregnant and about to get married, was a prank. Cohn’s mother, Jennifer, said in April, “It was a YouTube video like most YouTube people do for clickbait.”

Cohn’s boyfriend at the time and co-conspirator was 17-year-old Mikey Tua, and since then, his parents announced they’d taken away his social media to work through “some legal stuff.” Tua’s dad also posted that Danielle Cohn was not 15 and said that Tua wanted to be emancipated from his parents. “But his emancipation can give him prison time,” Tua’s father wrote.

Dustin Cohn wrote that he simply hopes his daughter can experience life in a world without “followers, fame, likes, and money.”

“I hope others around her wake up and realize it shouldn’t be about the money, but living life as a kid that she is,” he wrote.