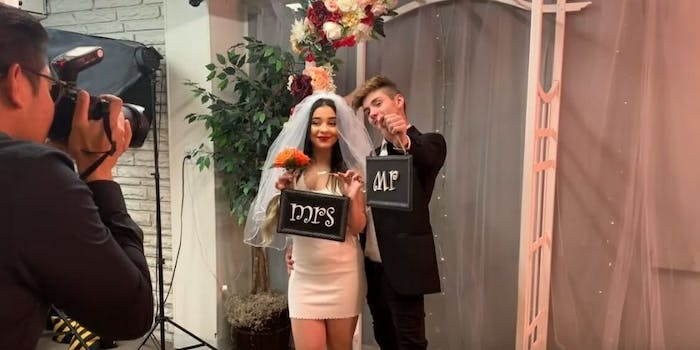 No one is sure what to think of this.

Last week, Cohn—who started her social media career by gaining millions of followers on Musical.ly—tweeted the date 8/14/19, feeding speculation that it was the due date of her possible baby. Her boyfriend Mikey Tua also tweeted the date with the hashtag #manibaby.

Two days later, Cohn tweeted that she and Tua were heading to Hawaii after they had gotten married in Las Vegas by an Elvis impersonator.

They accompanied that with a YouTube video titled, “We are expecting…” where they broke the news of her supposed pregnancy to both sets of families. The families immediately speculated they were being pranked, and then they got enraged in the video that has nearly 3 million page views.

“This is a guarantee that we’re going to be together forever,” Cohn said amid all the yelling in the Las Vegas hotel room.

Though Cohn—who has 3.5 million Instagram followers and 1.2 million YouTube subscribers—is supposedly 15 years old, others have speculated that she might be as young as 13 or as old as 17.

Only two parts of a four-part YouTube series on this subject across the channels of Cohn and Tua have been released. Maybe this entire story arc is real, but many people aren’t buying the premise.

If that’s the case, Cohn certainly wouldn’t be the first YouTuber to pretend to be pregnant to earn page views and subscribers.