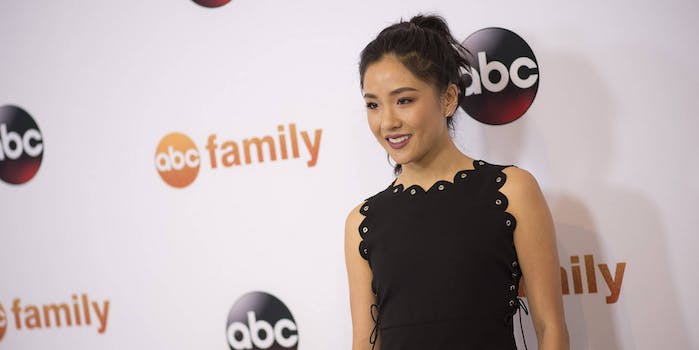 'We don't need you to save us from anything.'

Another summer, another trailer featuring a white actor playing the hero of a movie about nonwhite culture. And Constance Wu is having none of it.

In a letter posted to Twitter on Friday, the Fresh Off the Boat star took issue with Matt Damon’s pricey upcoming action flick The Great Wall, in which his very serious character attempts to defend the Great Wall from a monster. More specifically, she calls out the white male savior myth that’s been the norm in Hollywood for decades.

Damon is currently starring in yet another Jason Bourne movie, in which he has just 45 lines of dialogue, including “Drive!” and “I’m coming.” It’s been pointed out that Damon’s head has been expanding with every movie poster, and in the Great Wall poster we don’t even see any actual Asian actors, just a giant Damonface.

Wu also called out the potential casting of Leonardo DiCaprio as poet Rumi last month. Rooney Mara’s casting as Tiger Lily in the recent Peter Pan flop, Tilda Swinton in Doctor Strange, Scarlet Johansson in Ghost in the Shell, and the use of popular white actors in Exodus: Gods and Kings are a few more recent controversies held up as examples of this industry-wide problem.

After Wu’s letter went viral, the hashtag #StarringConstanceWu started circulating, following up the recent #StarringJohnCho hashtag that recast the Star Trek actor in white-guy roles like…

John Cho as Mark Watney in The Martian? I'd see it! #starringjohncho pic.twitter.com/bv78YBwVQd

But Wu is also asking Hollywood to do better: “If white actors are forgiven for having a box office failure once in a while, why can’t a POC sometimes have one? And how COOL would it be if you were the movie that took the ‘risk’ to make a POC as your hero, and you sold the shit out of it?!”