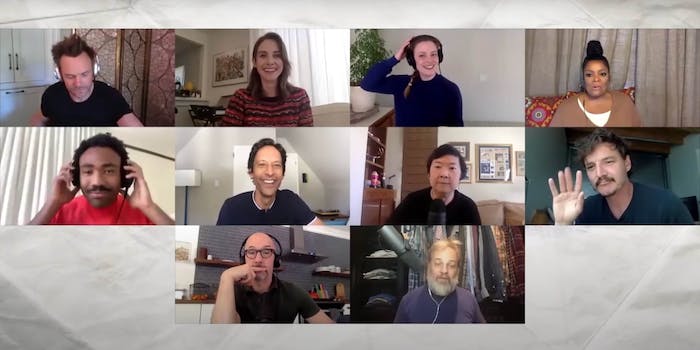 The ‘Community’ cast is down to do the movie

The cast reunited for a virtual table read.

For years, Community fans clung to the fitting (albeit unintentional) rallying cry of “six seasons and a movie.” And while we ultimately did get those six seasons, the movie always felt more like a fever dream—at least until now.

Officially, we have no updates about a Community movie, although it’s a question that’s followed the cast since Community ended in 2015. But between Community coming to Netflix last month and a virtual table read that united the entire Community cast (including Donald Glover, who left in the middle of season 5), there’s been a renewed interest in Community.

On Monday, the cast’s table reading of “Cooperative Polygraphy,” the season 5 episode that takes place after Pierce Hawthorne’s (Chevy Chase) funeral, went live on YouTube. Pedro Pascal stepped in for Walton Goggins (who couldn’t make the virtual table read), but otherwise, the rest of the cast was game for the read; series creator Dan Harmon also participated.

Harmon and the cast also filmed a Q&A where they reminisced about the show—especially now that’s it’s gotten the Netflix bump—and even addressed the movie question. As Glover pointed out, “We can’t make movies right now.” But with time, he’s also had time to look back on the show and the experience of making it.

“Watching it now, I’m like, ‘Oh, this show’s really punk,’” he added. “Really subversive and like kind of punk. We had so much fun and now I’m like, ‘I want to watch this show again like it was brand-new.’”

At one point, Glover and co-star Danny Pudi even pitched an idea for the film’s plot: Abed’s attempt to search for Troy, who was last seen about to venture on a boat around the world.

The moderator, Variety’s Michael Schneider, later asked the entire cast if they’d be open making the movie, and while they didn’t confirm anything was in the works (and it resulted in Harmon taking his shirt off to avoid saying anything concrete), they were much more open to the idea now. As Glover reminded us, as long as we’re all still in quarantine, we’re not getting any movies, but with several years separating them and the show, the cast remembers it much more fondly.

“When I watch the episodes now, I have these waves come over me of like, first of all, my writers were amazing and probably didn’t get rewarded for it as much as maybe I thought the job was, but second, the whole cast is just like a machine on a basketball court that automatically slam dunks everything that you put onto the court,” Harmon said. “We’ve all had enough success individually that we all know it doesn’t get any better.”