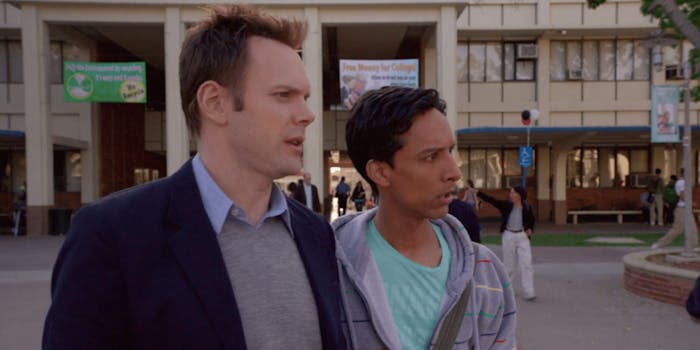 Fans mourned the death of Community after it went off the air in 2015. They were gutted to know their calls for “six seasons and a movie” would probably never come to fruition. But now, fans of Dan Harmon’s beloved sitcom will get a consolation, as the show’s cast and creator will reunite for a virtual table read to benefit coronavirus relief efforts.

The Community table read will include series mainstays Joel McHale, Gillian Jacobs, Danny Pudi, Yvette Nicole Brown, Alison Brie, Jim Rash, and Ken Jeong, along with Harmon and Donald Glover, who departed halfway through the show’s fifth season. The cast will return to Greendale Community College’s library study room to reenact season 5’s “Cooperative Polygraphy.” The beloved bottle episode takes the gang back to the study room following Pierce Hawthorne’s (Chevy Chase) funeral only to find his executor, Mr. Stone (Walton Goggins), waiting for them. Mr. Stone demands that each member of the group take a polygraph test to rule out whether they murdered Pierce, after which they are bequeathed gifts from the Hawthorne Wipes heir.

“Cooperative Polygraphy” set the gears in motion for Glover’s exit in Community’s next episode, “Geothermal Escapism.” Pierce bequeaths Glover’s Troy Barnes his share in Hawthorne Wipes with the stipulation that Troy sail around the world in his boat, Childish Tycoon (a nod to Glover’s then-burgeoning rap career under the Childish Gambino moniker).

Unfortunately, Goggins cannot make the table reading, nor will Chase be there, likely on account of his character being dead in the episode. (Chase also notoriously feuded with several of his costars, so his participation seemed dubious anyway.)

Community enjoyed a resurgence when it became available on Netflix on April 1. McHale has also kept up his prolific hosting duties, interviewing several prominent subjects from Netflix’s true crime smash Tiger King for The Tiger King and I aftershow episode.

The Community table read will air on Monday, May 18 at 2 p.m. PT on Sony Picture TV’s Community YouTube page. The cast will also participate in a fan-driven Q&A, for which fans submit questions on social media by using the hashtag #AskCommunity and tagging @CommunityTV. Fans will be asked to contribute to José Andrés’ World Central Kitchen and Frontline Foods, both of which provide fresh meals to coronavirus frontline workers.