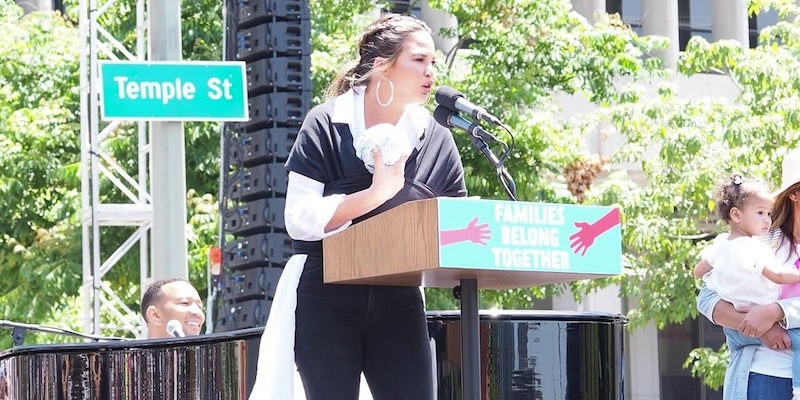 Chrissy Teigen was a vision of strength and solidarity for the families separated at the border during Saturday’s Families Belong Together March in Los Angeles.

During the event, she spoke passionately and extolled the virtues of America’s immigrant population. It was a memorable moment, to be sure, and it was made even more heartwarming by the fact that she spoke with her newborn son Miles cradled in her arms the entire time.

Taking to Instagram after the March, Teigen announced that this was, in fact, baby Miles’ first rally.

“Baby’s first rally. #keepfamiliestogether,” the mother of two penned as an Instagram caption along with a snap of herself with her young son. It will likely act as the first of many to come, given Teigen’s propensity to speak her mind and ensure her voice is heard.

Nestled in a sling around Teigen’s neck, Miles Theodore got his first round of experience with political activism, and it couldn’t have been a prouder moment for both mother and son. Keeping Miles close to her as she shared searing, powerful words with the crowd helped to bolster the message she was driving home.

“I’m incredibly proud to be the daughter of an immigrant,” Teigen said during her speech. “My mother grew up in a very small village in Thailand and she never lets me forget it.”

Chrissy Teigen at the Families Belong Together March: "I'm incredibly proud to be a daughter of an immigrant." https://t.co/Q0HTxGqLaQ pic.twitter.com/2oS1JhDcYj

The 32-year-old social media star and Lip Sync Battle co-host took the stage ahead of her husband John Legend, who performed a new song for the massive crowd called “Preach.” Teigen and Miles looked on while Legend shared his own powerful message with the new track.

“We are here and we are not going away,” Teigen stressed. “We are here because we believe America can and should do better. And John and I are going to keep showing up and speaking out and making sure your voices are heard.”