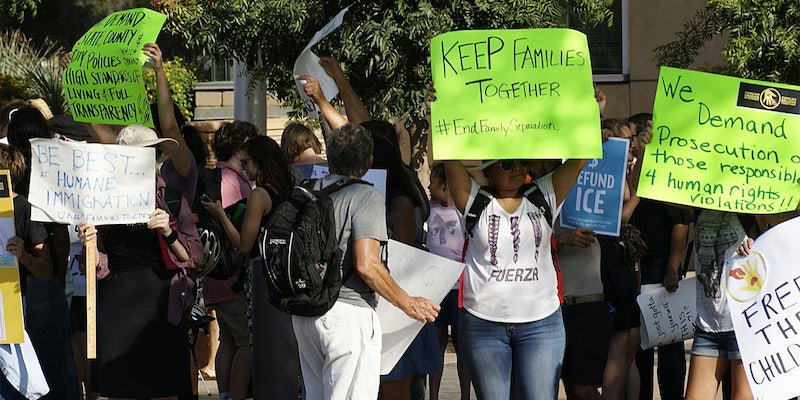 ‘We will continue to fight’: The Family Separation Protest is still on for June 30

Earlier this week, the Women’s March, Pantsuit Nation, the National Domestic Workers’ Alliance, MoveOn, and many other member organizations within the Families Belong Together Coalition, announced the Family Separation Protest at the White House, along with sister protests across the nation. The march, to be held June 30, was to let the Trump administration know that its “zero tolerance” policy of stopping migrants at the border to pull children away from their parents, prosecute the adults, and throw the young children in detention pens was nothing short of a human rights violation.

On Wednesday, after international outcry, President Donald Trump signed an executive order to end his separation policy. But that gesture hasn’t changed a thing as far as organizers are concerned. The Family Separation Protest will go on.

“We will continue to fight, because of so many reasons,” Anna Tarkov, national media and communications director for Families Belong Together, told the Daily Dot in an email. “For example, the language of this executive order does not say anything about reunifying the thousands of families already torn apart. Many of the parents have already been deported and it’s possible they will NEVER see their children again.”

She went on to note that the order doesn’t do anything not to criminalize asylum seekers and refugees, nor to keep children safe. It does, however, direct Attorney General Jeff Sessions to file a request to rescind a law that limits the number of days children can be jailed (currently at 20), which means families could be jailed indefinitely.

“There is no mention of any sort of accountability in this order,” Tarkov added. “These human rights abuses and terrorization of families and children must be accounted for and we must provide these families counseling and anything else they may need to deal with the trauma that our government has inflicted on them.”

Why the protest was created

On April 6, the Justice Department—headed by Sessions—announced its new “zero tolerance policy” criminalizing undocumented immigration at the border between the United States and Mexico. Shortly thereafter, in May, Sessions doubled down.

“If you cross this border unlawfully, then we will prosecute you. It’s that simple,” Sessions said in his speech at the Association of State Criminal Investigative State Agencies 2018 Spring Conference.

To be very clear, separating children from their families was not a policy until the Trump administration made it a policy. It was intended to deter migrants from trying to enter the U.S. altogether, a maneuver that has never proved particularly effective. As a result, almost 2,000 children were taken away from their parents between April 19 and May 31, and shuffled into makeshift camps while their parents await prosecution. (More have been detained since.) Recently, Democratic Sen. Jeff Merkley of Oregon took a tour through one of these detention sites. He compared the enclosures where children are held to “dog kennels.”

“They’re big boxes made out of wire and fence posts,” Merkeley said in a CNN interview in early June. Other images from inside these facilities confirm the idea that the U.S. government is currently keeping kids in cages.

BREAKING: Border Patrol @CBP just gave us this video of the detention facility we toured yesterday in McAllen, Texas. We weren't allowed to bring in cameras, or interview anyone. To be clear: this is government handout video. pic.twitter.com/Zjy80qIZFZ

Alongside his zero-tolerance policy, Sessions revoked asylum for people fleeing domestic and gang violence—which, incidentally, most heavily affects migrants from El Salvador, Guatemala, and Honduras, who also account for the families most frequently separated at the border. Often, the imminent threat of fatal violence forces parents and their children to leave their home countries because their governments can’t or won’t protect them. Asylum applications cannot be made remotely: For many of these people, showing up at the U.S. border kicks off a long process that cannot be initiated any other way.

Perplexingly and infuriatingly—because splitting up families has apparently always been an item on the Trump agenda—the administration has alternately denied this reality and attempted to explain it away. In a June 14 press conference, for example, Trump mouthpiece Sarah Huckabee Sanders reiterated Sessions’ justification that “it is very biblical to enforce the law” while ignoring the fact that the Trump administration architected this particular policy.

But after days of ramped-up media coverage—including audio of kids wailing as they are separated from their parents—and public outcry, President Trump signed an executive order on Wednesday to end family separation at the border. Meanwhile, what that means for the thousands of families already separated remains grim.

When is the Family Separation Protest?

For those who can get to Washington, D.C., the Family Separation Protest will begin with a rally at 11 a.m. in Lafayette Square on Saturday, June 30. The event should wrap up by 2 p.m.

For those who can’t make it to Washington, D.C., but want to voice their discontent at the Trump administration’s policy, you’re in luck: On FamiliesBelongTogether.org, you can look up local demonstrations by zip code to find the event nearest you. Alternatively (or additionally), Women’s March organizers announced a “mass civil disobedience in D.C.” for Thursday, June 28.

If you can’t make a local protest on the 30th, you can still find ways to help. A number of organizations seek volunteers, and financial donations are appreciated as well.

Here is a helpful list of groups in which you can get involved (the Texas Tribune has one too). Are you a lawyer, law student, or paralegal who speaks Spanish or doesn’t mind working through an interpreter, and who has worked with asylum-seekers before? Consider giving a week of your time to the CARA Project. Are you an attorney who’s able to offer some pro-bono services? Take a look at Kids in Need of Defense, Las Americas Immigrant Advocacy Centers, American Gateways, Justice for Our Neighbors, or the Texas Civil Rights Project.

Where to send donations

If you are not a lawyer and do not live in Texas, you can always go the donation route. There’s the Refugee and Immigrant Center for Education and Legal Services (volunteers also welcome); the Detained Migrant Solidarity Committee; Diocesan Migrant & Refugee Services; the Asylum Seeker Advocacy Project; the Young Center for Immigrant Children’s Rights (also seeking volunteer advocates); and of course, the ACLU.

Regardless of whether or not you can attend a protest or have a few dollars to spare, call your representatives. The ACLU can help you get in touch.