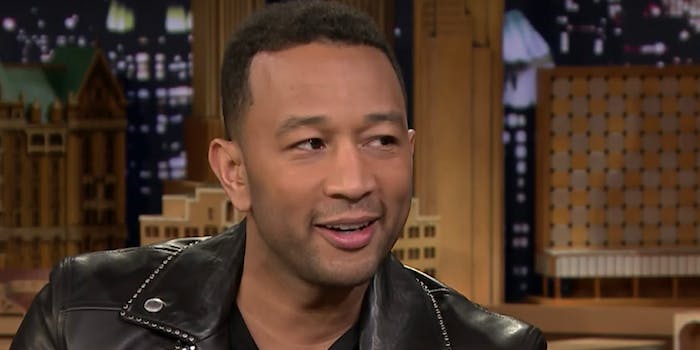 That's that on that.

John Legend finally said what’s on plenty of people’s minds: Who cares if White House press secretary Sarah Huckabee Sanders was asked to leave a restaurant, and can we please talk about reuniting immigrant kids with their parents?

TMZ asked Legend and his wife, social media queen Chrissy Teigen, to weigh in on politics as they left dinner in Beverly Hills on Wednesday. A reporter questioned Legend about Real Housewives of Atlanta star Claudia Jordan’s comment on Sanders’ weight, and Legend made it clear he doesn’t give a shit.

“Ask me ‘Should we be reuniting 2,000 kids with their families?’” Legend said, talking about the thousands of kids taken from their parents under President Donald Trump’s “zero tolerance” immigration policy. “Yes we should.”

Last weekend, Sanders tweeted that she was booted from the Red Hen in Lexington, Virginia, because of her job in the Trump administration.

Lest it wasn’t clear the first time, Legend continued: “I don’t care about fucking Sarah Sanders. Reunite the fucking kids with their families, then we’ll talk about Sarah Sanders and her fucking dinners.”

Teigen later tweeted some of the harassment she and Legend received after his comments, writing that she was “calmly in bed, scrolling through Twitter” to cope with the response.

me, calmly in bed, scrolling the twitter. you: pic.twitter.com/zcjDIA1zk0

Earlier this week, Teigen responded to Sanders’ tweet about getting booted from the Red Hen. “Didn’t you morons get your panties in a wad defending the baker that didn’t want to make cakes for gay couples?” she asked.

Didn’t you morons get your panties in a wad defending the baker that didn’t want to make cakes for gay couples? https://t.co/1idczybcwA

An executive order ended the separation of immigrant families last week, but the Cut reports that Secretary of Health and Human Services Alex Azar said Tuesday that 2,047 children are still in government custody. The Trump administration didn’t implement a plan to reunite families already separated.