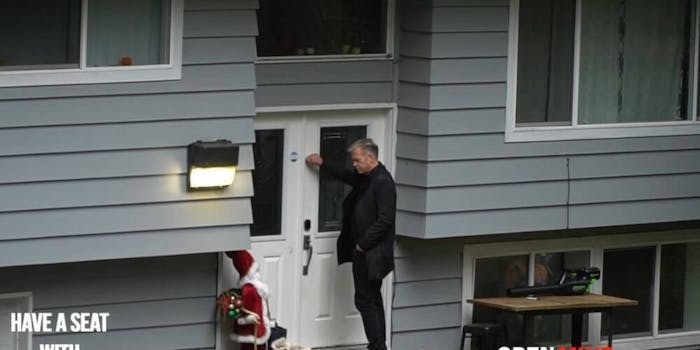 Have A Seat With Chris Hansen/YouTube

Chris Hansen is going after Onision, and the local authorities are also in contact with his accusers (updated)

The audio of the call has been released.

Update 12:26pm CT, Feb. 17: According to the Daily Beast, the Pierce County (Washington) Sheriff’s Department has been talking to those who have accused Onision of abusing them.

Previously, Chris Hansen had interviewed the sheriff’s department public information officer who said last month that information was being gathered on the YouTuber and that it could eventually be given to the local prosecutor’s office.

“We want [the alleged victims] to know that there is a detective assigned, they are working with other agencies, the prosecutor’s aware that this is going on, we’re continuing to put stuff together and feed it to the prosecutor, and when the time’s right, we would like to do what we can to put an end to this,” the spokesperson said.

Original story is below:

Chris Hansen made his name as a TV reporter when he was the host of To Catch a Predator, where he would confront suspected pedophiles who were in the act of trying to lure minors. Since then, Hansen has been an independent journalist who now has a channel on YouTube called Have A Seat With Chris Hansen.

His latest project? Going after controversial YouTuber Onision, who has been accused of abusing multiple women. Last week, Hansen showed up at the house of Onision, aka Gregory Jackson and James Jackson, to confront him face to face.

Onision responded by calling the police and saying that Hansen was stalking him.

Hansen has been interested in Onision’s story for the past few months, interviewing different people on his YouTube channel—which has 188,000 subscribers. One video from last November compelled 1.5 million people to watch his chat with Shiloh, Onision’s former romantic partner who has accused Onision of abusing her in their relationship.

Multiple women have accused Onision of abusing them, and at least one woman has said he attempted to groom her when she was a minor.

On Saturday, Hansen released a short video on Twitter in which he explained that he traveled across the country to knock on Onision’s door. Instead of answering, Onision called for help.

Now, the audio of that call has been released. In the transcript, Onision says, “Hi, there’s a person that’s been stalking me online and they just showed up to my house. … They’re like YouTube stalkers. … I didn’t see any weapons. I just saw like six guys in my driveway.”

Onision told the dispatcher that Hansen was yelling at him through the front door.

“Can you hear what he’s yelling?” the dispatcher asked, and Onision said, “He’s yelling, ‘I want your side of the story, Greg.’ My name’s not even Greg.”

The dispatcher said, “OK. What is your last name?” Onision responded by saying, “My name is James Jackson.”

Dispatcher: And do you know what he was talking about? Why he was stalking you or anything like that?

Onision: Yeah, there’s like a… it looks like there’s 1…2…3…4…5…6 people in the driveway. But he..he. I had someone that I uh… there’s an 18… no, I think a 19 year old who I didn’t want to hang out with. I didn’t want to be around them. They have BPD and their stuff…their mental disorder was really affecting my life in a negative way and I didn’t want them in my life anymore. And uh… they went to this person and said a bunch of mean things about me and so now this person is trying to like, trying to aggressively pursue me in a really hateful way as a result.

Dispatcher: OK, you said they were from YouTube. So is it like… a show that they do or…?

Onision: It’s a live stream. Yeah, it’s a… I’ve already talked to a lawyer about slander and stuff. This guy is just really, really hateful towards me.”

After disconnecting with the dispatcher, Onision called back eight minutes later asking for a status update on when police officers would arrive.

“OK, it is still showing here on my screen and law enforcement has been advised,” the dispatcher said. “If anything does change or escalate call us back, OK?”

Onision responded by asking, “Are you guys going to show up?”

“Sir, it has been sent to the officers,” the dispatcher said. “They have to drive to you, OK? If anything escalates call us back, OK?”

But just because Onision wouldn’t talk to Hansen this time, that doesn’t mean the former TV journalist is giving up his quest.

”Still, I learned an awful lot in my investigation as to what has been going on inside that house,” Hansen said on Twitter after Onision called the police. “We’ll find out more in the days to come. We’ll give it to you all. Stay tuned. This is something you must see.”