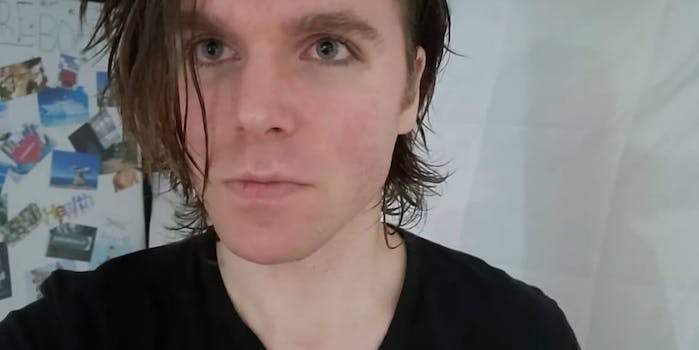 Controversial YouTuber Onision fake cries after being banned from Patreon

'Oh, you have an opinion of me. So you’re just going to ruin my entire career.'

One of YouTube’s most controversial figures has been banned from Patreon after he reportedly tweeted out another YouTuber’s phone number.

Gregory “Onision” Jackson, who the Kernel once termed “YouTube’s most troubled star,” tweeted screenshots of private messages between him and Billie Dawn Webb, according to the Verge.

Webb had recently accused Jackson of pressuring her into having sex—multiple women have now accused him of sexual harassment and abuse—and after her phone number was revealed in his screenshot, Twitter removed the tweet. Even though the doxing occurred on Twitter, Patreon removed Jackson from its platform.

“Yes, we removed Onision from Patreon as he violated our Bullying and Harassment as it relates to doxing,” a Patreon spokesperson told the Verge.

“I broke up with [Webb] in 2016,” Jackson told the Verge. “She has been upset with me ever since. I posted screenshots where I complimented our relationship all those years ago, expressing how I was sad about how it couldn’t work out.”

In his early YouTube videos, he was oftentimes bizarre, scoring a huge hit with the “Banana Song (I’m a Banana)” music video that reached 77 million views. He’s shown himself with teenaged girlfriends who met him when they were fans, and he’s used fake pregnancies in at least two of his storylines.

He was banned by VidCon for saying one of his ex-girlfriends was incapable of being raped because, as noted by Medium, he said she “had sex with more than 20 people.” He’s been accused by many people of grooming young girls for sexual purposes.

“At the height of Onision’s web-fame, voyeurs and drama-lovers alike would watch to see the tumultuous back and forth disputes between Onision and some of these girls, who were often dubbed as liars, as they attempted to defend themselves or worse—tell their story,” Phaylen Fairchild wrote on Medium.

Jackson did not appear to take the Patreon ban well. He said he was an innocent person being censored. In a video released Tuesday, he said, “Oh, you have an opinion of me. So you’re just going to ruin my entire career? Is that what you’re going to do? Oh, I’m sorry, the FBI never showed up. Oh, I’m sorry, the cops are all about onion boy, because it turns out, didn’t break a single law. What do we do? Our opinions have been invalidated so many times of him that we’re going to disable his Patreon. Wow, you would really do that.”

In another video uploaded to one of his channels on Wednesday, Jackson said, “I just wanted to let you know that I thought about it a lot and I wanted to apologize to you guys for being so irrational and maybe a little schizo. I’ve been up for about 20 hours and even since my Patreon got deleted, I haven’t been feeling very good. So, if you could forgive me, I would appreciate that. I would feel good about that.”

He then pretended to cry and go into hysterics about how people are using YouTube to make videos about him before he promoted his new website.