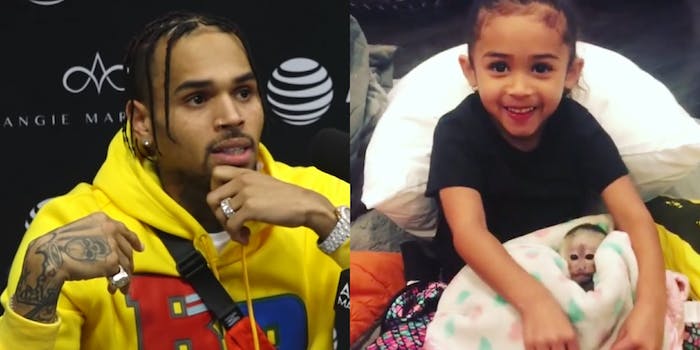 He wasn't exactly hiding the pet.

Chris Brown’s pet monkey could land him in a lot of trouble—and even in jail.

The California Department of Fish and Wildlife charged the rapper with illegally owning a monkey, TMZ first reported. Brown could face up to six months behind bars if he is found guilty.

Brown wasn’t exactly hiding the capuchin monkey, named Fiji, when he posted photos and videos on social media. The monkey was bought as a gift for his daughter, Royalty, and Brown shared their first moments together on his Instagram back in December 2017.

In one clip, Royalty is holding the money wrapped in a blanket wearing a diaper. You can hear Brown in the background joking with his daughter about the size of the monkey’s head.

A search warrant was issued on Brown’s home back in January of this year, and at that time the primate was taken and placed in a sanctuary. The Los Angeles City Attorney filed charges Wednesday.

Brown’s fate will be determined on Feb. 6, when he is scheduled to be arraigned. His charges include two misdemeanors for possession of an exotic animal, according to TMZ.

On Twitter, many have rushed to defend the singer, comparing his possible jail time to others they deem as much worse.

Chris Brown faces up to 6 months in jail for owning a pet monkey, Mannnnnnnn if y’all don’t leave this man alone,Michael Jackson was dressing his monkey in suits and adidas track pants and it was all cool, Let my boy Chris own Curious George

chris brown gets up to six months in jail for owning a monkey, yet jacob anderson gets a $400 fine for rape. something ain’t right pic.twitter.com/z5OkYlBQYH

So y’all really tryna put Chris Brown n jail for 6 months for OWNING a monkey? Y’all type weird how owning a unharmed monkey get u jail time but killing an unarmed black man get u fans and skittle autographs. Glad I found my worth n Christ cause we don’t have worth on earth smh

Some compared Brown’s possible six months behind bars to Brock Turner, who only served three of a six-month sentence for sexually assaulting an unconscious woman. Jacob Anderson, a fraternity president, received no jail time after pleading guilty to sexually assaulting a fellow student.

This isn’t Brown’s first run-in with the law.

In 2009, he got five years of probation after pleading guilty to felony assault for beating his then-girlfriend Rihanna. In 2017, Brown’s ex-girlfriend Karrueche Tran was granted a restraining order against him.