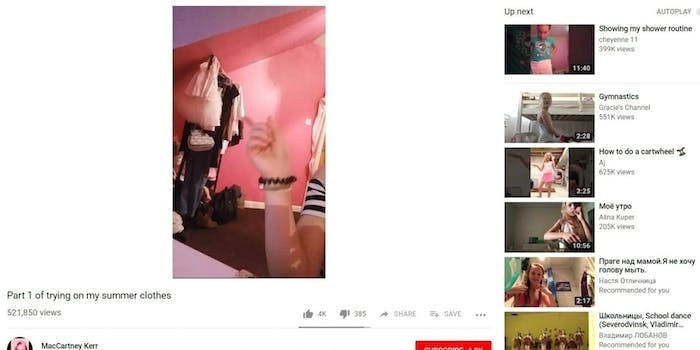 This is so disturbing.

While YouTube tries to protect children from disturbing and obscene content, people who enjoy watching kids star in their own videos are still free to write whatever they want in those videos’ comment sections.

As the ORKA YouTube channel points out in a video that has accumulated nearly 150,000 views in two days, there are large numbers of videos starring children that have attracted commenters that seem to be attracted to those children.

Case in point: a video by a girl who goes by the name of MacCartney Kerr. She has less than 5,000 subscribers, but her video titled “Part 1 of trying on my summer clothes” has accumulated more than 520,000 views and apparently keeps showing up in the recommended section of people who might or might not be interested in watching content like this. The video is basically a girl who appears to be a pre-teen trying on clothes. It seems pretty innocent until you scroll down to the comments section.

In the short video, the girl shows off her bare midriff, and she dances around briefly in a tight dress. That apparently was enough to draw comments like “You look so beautiful in that dress” and “That black dress looks amazing on you, great figure.”

One commenter linked a time stamp where the girl nearly showed her undergarments and instructs viewers to slow down the video to .25 of its normal speed.

A number of commenters are asking the girl to take down the video, wondering where her parents are, and calling out the “pedos” and “sickos” who enjoy watching the content.

MacCartney has other videos in which she plays with slime, shows off her bedroom, and explains her daily makeup routine. None of them have drawn close to the number of page views of her summer clothes vlog.

If you click on her content, plenty of other suggestive videos starring children show up in the recommended sidebar. That includes a video called “Showing my shower routine” and another one called “How to do a cartwheel” done by a young girl wearing a skirt. All of them have hundreds of thousands of views.

Other videos that appear to be Russian show thumbnails of young girls in bathing suits in the bathtub, and another vlog in which a young girl tells about her nighttime routine has accumulated more than 1.3 million views.

On many of these videos, the comment sections have been disabled, so we don’t have to read the inner thoughts of those who might be pedophiliacs. But in one of the Russian videos, one commenter wrote, via Google Translate, “What a shame when she grows up.” And another commented, “Nice. Nipslip.”

YouTube did not immediately respond to a Daily Dot request for comment on Wednesday morning. But it seems clear that protecting the children who spend time on the platform is not yet—or might never be—a job that is officially done.

Update 11:30am CT: YouTube responded to the Daily Dot by reiterating that content that endangers minors is unacceptable and that it aggressively enforces its policies against videos and comments that sexualize or exploit children. YouTube also pointed to its blog post in 2017 that announced how it was toughening its policies that would make children and families safer, including “a combination of automated systems and human flagging and review to remove inappropriate sexual or predatory comments on videos featuring minors.”

The platform also made sure to remind people that its terms of service state that the site is for people who are at least 13 years old, and if it’s determined that a user is not of that age, their channel will be terminated.

“Any content—including comments—that endangers minors is abhorrent and we have clear policies prohibiting this on YouTube,” a YouTube spokesperson told the Daily Dot. “When we become aware of new and evolving patterns of abuse, we take swift action in line with our policies. This includes terminating channels and reporting abuse to local law enforcement via NCMEC (the National Center for Missing and Exploited Children). Last quarter, we removed hundreds of thousands of individual videos and over 25,000 channels for violating our child safety policies. We are always working on new solutions, such as improving our machine learning classifiers to better identify inappropriate comments. We’re committed to getting this right and recognize there’s still more to do.”