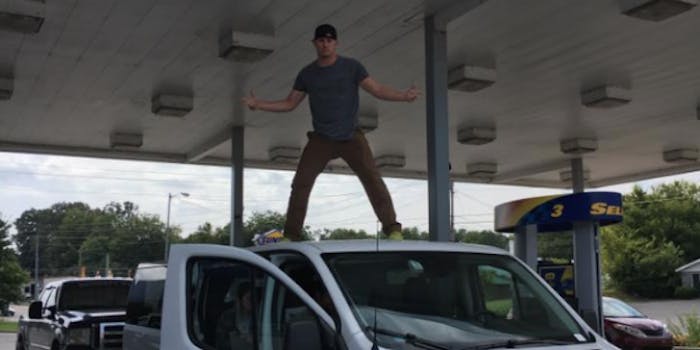 Not the worst surprise to get at work, tbh.

If you’ve seen Magic Mike XXL, then you already know about Joe Mangianello’s iconic rest stop dance scene. If you haven’t, he basically tries to make the snack food section sexy as a personal challenge, and he ends up seductively asking the cashier, “How much for the Cheetos and water?”

Co-star Channing Tatum had the opportunity to recreate that scene this week at a North Carolina gas station, so he gave a cashier named Beatrice an impromptu dance party on Facebook Live. It’s decidedly more PG than the dance routine in the movie (at one point they pause so Tatum can take a picture with a mother and her toddler), but there was still a good amount of popping and rolling. Plus, most importantly of all, Beatrice seems to be enjoying herself.

The dancing starts off slowly at around the 2:30 mark, but by 3:20 Beatrice turns on some music and all bets are off.

Not the worst surprise to get at work, tbh.