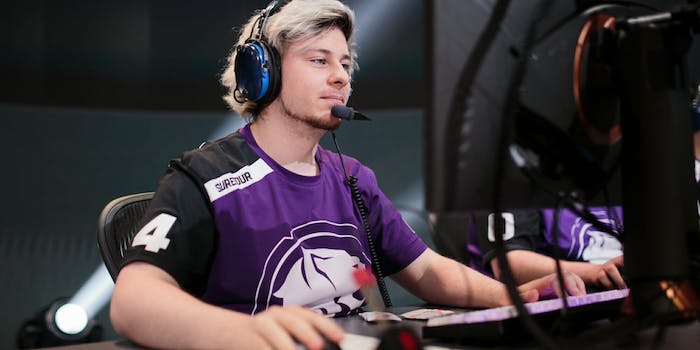 Esports still has a troubling relationship with women

Surefour's latest comments point to a larger problem in the industry—and something needs to change.

At least, that’s what Surefour said during a Blizzard Entertainment media event, after which the Overwatch League athlete decided to tweet about it.

“Blizzard media day and they asked me what my favorite thing to do was,” Surefour posted yesterday afternoon, “I said look at girls on Instagram. They said they couldn’t use that.”

Blizzard media day and they asked me what my favorite thing to do was and I said look at girls on Instagram. They said they couldn't use that.

“It’s a good thing anime girls don’t have twitter accounts,” Surefour posted last May while talking about his thirst follows. Another tweet reads, “beautiful girls will be my demise.”

After Thursday’s tweet, women in the esports journalism world began criticizing Surefour, myself included. One tweet, in particular, stuck out to me: Rock Paper Shotgun weekend editor Jay Castello argued there’s a double standard between straight men and queer folks openly talking about their sexuality in esports.

“Please compare the reaction to straight esports pros tweeting about how much they like staring at hot women vs, say, SonicFox tweeting ‘i’m gay,'” Castello, who’s queer, wrote. “I like hot women too; guess what happens when I talk about it?”

imagine joking about this. imagine being serious??? imagine saying this aloud with a mouth at a press event of all places

When queer women open up about our sexuality, we’re doing so to reclaim space and assert that our attraction to other women is real, valid, and beautiful. That’s not the case with someone like Surefour. He has all the space he needs as a man interested in women—the Western world was literally built to accommodate white men’s pleasures—and he has chosen to use that space to ogle at women and show other men that doing so is OK in a medium where women are already easily harassed. It’s totally inappropriate for a public-facing member of the Overwatch League.

“It’s difficult to explain because the tweet itself may seem quite minor, but when put in context with the exclusionary nature of esports culture, it’s yet another frustration that women have to deal with, another way they’re dismissed and turned into just something pretty to be looked at,” Castello told me over Twitter DM. “Also, Surefour has this ‘brand’ where he often talks about beautiful ‘girls’ (notably, not ‘women’), whereas women and queer people are put under a ton of scrutiny for expressing their sexualities.”

The reaction to Surefour’s tweet isn’t just about Surefour. Esports has a lengthy and ongoing problem with women, more often than not because we are treated like outsiders. Men don’t want to talk about women in gaming; they want to obsess over the latest roster changes or the Overwatch League’s meta.

Speaking of which, only one woman plays in the Overwatch League: Shanghai Dragons’ Se-yeon “Geguri” Kim. Geguri faced an uphill battle just to stay in competitive Overwatch. In 2016, Geguri suffered intense scrutiny after male competitors alleged her skill came from aimbotting. This was ultimately proven false by Blizzard, but in order to show she was a legitimate pro, Geguri streamed herself playing the game for an hour. To protect herself, Geguri had to wear a mask to remain anonymous, and she said the entire incident caused her stress that slightly diminished her performance. Geguri was just 17 years old at the time and already treated as if she couldn’t be real.

Then there’s the sad story of “Ellie,” a fake female esports athlete reportedly created as a “social experiment” by a streamer named Punisher. Initially, Ellie was praised as the first female Overwatch player to be signed to a North American team in the Overwatch Contenders league. But after her signing, male competitive Overwatch fans scrutinized her identity, questioned her skills, and suggested doxing her. Blizzard later confirmed that Ellie “was a fabricated identity and is a smurf account,” but only after men had turned Ellie into a subject of a public kangaroo court.

Men in esports hyperfixated so much over Ellie’s identity that they completely ignored the real story: Men manipulating women for their own gain. An investigation by esports analyst Rod “Slasher” Breslau reports that Punisher reached out to a 17-year-old teenage girl to pose as Ellie on voice chat while he played. Sources told Slasher that the 17-year-old behind Ellie’s voice wasn’t the only woman that Punisher contacted for his “social experiment,” and that he specifically used his “egirl smurf” to “grief [Overwatch League] and other top players.” Another female player even claimed Punisher “was shady and made creepy jokes,” such as saying, “I love you” over voice chat.

– Ellie has said in private messages to teammates in the last hour confirming she has not been the one playing, she is a 17-year old girl but is 'not good' at OW, no Second Wind players/mgmt knew
– Blizzard is currently holding a meeting with SW players/mgmt

I have received screenshots of Punisher in a private message conversation with a woman Overwatch player 'Catsui', who was not aware of this incident until recently. Punisher, seen in a Battlenet conversation under Ellie, uses his 'egirl smurf' to grief OWL and other top players. pic.twitter.com/K1Tb2PFVLL

Bunnyadore tells me she met Punisher through quickplay LFG and after playing duo with him a girls voice suddenly came on & they were both laughing. Bunny says Punisher was shady and made creepy jokes saying 'I love you' & using her cute 'scottish accent' as one of his girl voices pic.twitter.com/hC4lrGxQcB

Women in esports quickly noted how the “social experiment” manipulated young women and made light of sexual harassment in esports, but men largely downplayed that point. Ironically, even Slasher criticized reporters for covering Ellie without “due diligence,” claiming it “wasn’t worthy of dozens of articles and tweets” because the controversy was just “some asshole kids trolling and griefing each other.” Like other men in esports, he failed to see the larger problem at play.

When I brought up why men in esports enable and defend men like Surefour, Castello echoed a point reflected in Ellie’s story: Way too often, men dismiss what women go through.

“There’s definitely this feeling that sexism has to directly say, ‘I hate women’ (and the same goes for homophobia, transphobia, racism etc.), whereas things like [Surefour’s tweet] fall into a more complicated category of contributing to a wider unwelcoming environment,” Castello said. “When you don’t experience that environment, it can be easy to overlook or dismiss some of the things that contribute to it, and I think some people then leap to [the criticized person’s] defense because they don’t want to feel judged for contributing to it.”

Ellie may be fake, but the way men in esports responded to her reflects the problems we face on a day-to-day level in the industry. Look no further than Dot Esports managing editor Saira Mueller, who founded the Women of Esports initiative (which I also joined). In an October 2017 essay reflecting on #MeToo and esports, she opened up about her experiences with sexual harassment in the industry and how everyone from “owners of well-known organizations” to “esports journalists” are complicit in the problem.

I beta-read the essay before publication while freelancing with Dot Esports (Mueller also previously served as deputy editor and esports reporter for the Daily Dot), and I was shocked by Mueller’s account. It was the first time someone showed me that esports had a problem with women. When I reached out to Mueller to see what she thought about Surefour, she brought up an important point: It’s not about his sexuality, it’s about how he framed the tweet.

“As a woman in the industry, it makes me super uncomfortable for a pro player to be going around saying his favorite thing to do is look at girls,” Mueller told me over Twitter DM. “Like, sure we can all appreciate people that we’re attracted to. But it was more that he’s saying it’s his favorite thing to do. That’s what got to me.”

Granted, Surefour is just one person; he isn’t the root of esports’ women problem. He’s part of an overrun species cultivated in a male-dominated field that made it OK to shit on women. In esports, women are constantly told that we don’t belong. We’re not professional industry members; we’re hot girls on Insta. Soon, we start to believe it ourselves, even though we play an invaluable role in esports every single day.

If esports truly wants to embrace women, that mindset needs to end. And that means talking about it, criticizing it, and calling out men like Surefour and Punisher when they contribute to the problem.