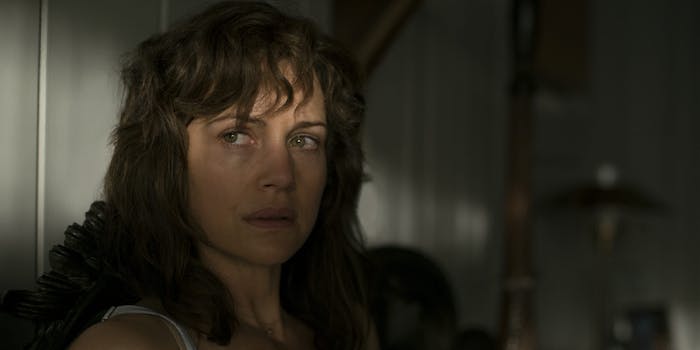 The 9 best horror movies and series to stream in October

Sure, 'Stranger Things' is coming, but here are some other titles worth a scare.

It’s been a good year for horror: It and Get Out were two of the most popular movies of 2017, and original horror is finding its way to platforms like Netflix, Hulu, and Amazon. October is especially heavy on the streaming horror, so here are some suggestions to help you through the woods.

Check out this week’s Upstream podcast for even more horror talk.

It’s the year of the Stephen King adaptation, and Gerald’s Game might be the best one. Mike Flanagan (Hush, Oculus) takes a novel that has long been considered unfilmable and imbues it with tension and emotion. Carla Gugino gives a standout performance as Jessie, a woman who is left handcuffed to a bed in a remote cabin after her husband Gerald (Bruce Greenwood) dies unexpectedly. The bulk of the film concerns her survival and how deep into the past she can go, and it actually improves upon the novel.

Ana Lily Amirpour’s follow-up to A Girl Walks Home Alone At Night steps out of the shadows and into the blinding sunlight of the Texas desert. The Bad Batch also concerns cannibals, but unlike Raw, it focuses on a futuristic dystopia in which undesirables are branded and, often, consumed and where protagonist Arlen (Suki Waterhouse) has to decide how to survive. Jim Carrey, Jason Momoa, and Keanu Reeves also star.

Originally released as a go90 series, Hannah Macpherson’s [email protected] zooms in on the horror and suspense of teenagers and social media. She told the Daily Dot last year: “The monster-in-the-house trope—the house is online. I really wanted that to play out visually.” Teenage girls drive the narrative here, as they attempt to figure out the motive and identity of a mysterious figure named Monkeyman. Two seasons are out via go90, but Hulu is streaming season 1.

Transitioning a popular podcast to TV doesn’t always work, but Amazon is jumping in with its adaptation of Lore. Podcast creator Aaron Mahnke grew Lore’s fanbase in just two years with its exploration of urban legends and folklore, and with X-Files’ Glen Morgan as showrunner, the supernatural element will be intact. The six-episode series will cover Dr. Walter Freeman, “father of the icepick lobotomy,” changelings, werewolves, and more.

David Fincher’s first Netflix original series isn’t that far off from Zodiac. Set in 1979 and based on Mark Olshaker and John E. Douglas’s best-selling book of the same name, Mindhunter pits two FBI agents (Jonathan Groff and Holt McCallany) in the Behavioral Science Unit against incarcerated serial killers to figure out what makes them tick. One recent teaser illustrates exactly how that could go wrong.

There’s yet another Stephen King adaptation landing on Netflix, and this one involves rats and murder. In Zak Hilditch’s take, Thomas Jane plays Wilfred James, a Nebraska farmer who has a crisis of conscience when wife Arlette (Molly Parker) says she wants to move to the city and take their teenage son. What follows is a signature King ghost story but it expands in Jane’s dead-eyed portrayal of Wilfred. Mike Patton provides the anxiety-inducing soundtrack, and it couldn’t have been a better choice.

If you have Netflix, you’re pretty much contractually obligated to watch Stranger Things season 2 at this point.