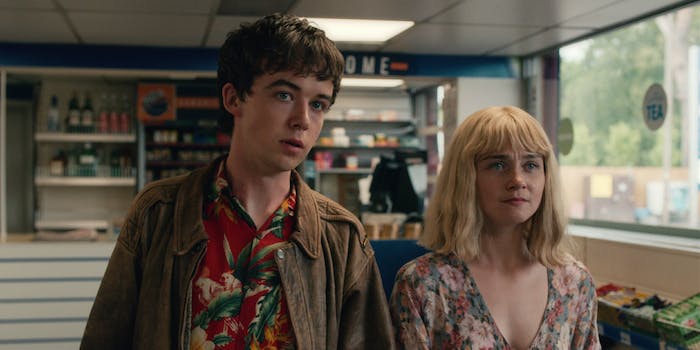 Here's what you need to binge.

There’s nothing worse than getting five episodes into a new series that never fully delivers—especially when there are so many other shows out there to binge. At the Daily Dot, we review nearly every new original series that premieres on Netflix, Amazon Prime, and Hulu, and we’re curating our favorites from the year here. We’ll be refreshing (and re-ranking) the list monthly, so there will always be something new to discover. (Note: For the purposes of this list, we’re focusing only on shows that released their first season in 2018. If you have some catching up to do, perhaps start with our list for the best new shows of 2017.)

This Netflix original series presents us with a boy named James, who is pretty sure he’s a psychopath. He’s already murdered animals, and now he’s ready to pivot to humans. But when he meets classmate Alyssa and decides she’ll be his first victim, he gets more than he bargained for. The two embark on a road trip, which inadvertently becomes a death trip, and the series deftly balances dark comedy with genuine emotion. —Audra Schroeder

Set during the mid-1960s, The Last Post follows life in and around a unit of Royal Military Police operating in the port city of Aden—now part of the nation of Yemen. The result is a little bit Mad Men and a little bit Army Wives, and it’s most definitely unique. There’s love, war, and infidelity. It can feel like a soap opera, but both the jaw-dropping setting and the other storylines ensure that it’s not The Bold and the Beautiful: Yemen Edition. It’s also an intriguing exploration of a slice of history many of us don’t know about but that’s instructive for our own modern era. —David Wharton

This German-made pre-WW2 drama takes viewers back in time to the Weimar Republic in the Golden Twenties. Creators Tom Tykwer, Hendrik Handloegten, and Achim von Borries recreate the atmosphere with stunning detail. With production costs exceeding $40 million, the show is the most expensive German TV series and non-English language drama series ever. The end result is Cabaret meets crime television. It also offers Americans a dire warning. As the plot progresses, heroes must choose between their morals and nationalism. Babylon Berlin shows us how a progressive nation can crumble when it allows bigotry and intolerance to fester. —Tess Cagle

While Britannia is clearly inspired by Game of Thrones, the show still feels very much like its own beast. A beast filled with treachery, terrifying druids, and a whole mess of hallucinogens. Britannia plants its freak flag early on. Within the first few minutes, you’ll see Mackenzie Crook appear as the most unsettling druid you’d ever care to meet, watch a man dive off a cliff and into a nightmare dreamscape fueled psychotropic plants, and then discover that this period drama has chosen as its theme song the trippy 1968 Donovan joint “Hurdy Gurdy Man.” For some inexplicable reason, it works. —D.W.

Is the future of television in merging with the phone that reckoned to replace it? Mosaic is an HBO miniseries and interactive adventure from writer Ed Solomon and Steven Soderbergh, concerning the questionable death of wealthy children’s book author Olivia Lake (the marvelous Sharon Stone) in a small, fictitious Utah town. What’s unique about this mystery murder miniseries is the brilliant app, from which you can watch the story from different points of view with added content. You’ll enjoy playing detective in this medium-altering experiment. —Kahron Spearman

Castle Rock co-creators Sam Shaw and Dustin Thomason play the location up as a town “that has been visited by nightmares for centuries,” and that’s definitely touched on in Stephen King’s adaption’s pilot episode. The prison looms over Castle Rock and draws Henry Deaver (Moonlight’s Andre Holland) back from Texas, where he’s been representing death-row inmates. He meets Bill Skarsgård’s pale, unnamed prisoner, who has been discovered in Shawshank’s bowels, and takes him on as a client. Castle Rock does rely more on the supernatural and ephemeral than straightforward horror, though there are stretches where you’re just waiting for the jump-scare. —A.S.