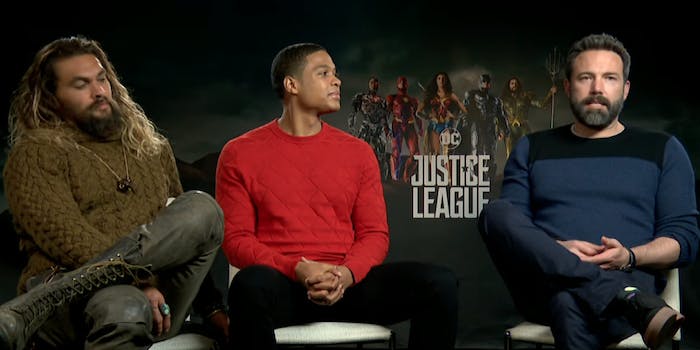 The 'Justice League' actor does a little damage control as he promotes his new film.

Ben Affleck is promoting his new movie Justice League, but he’s also trying to escape the negative publicity he received after the Harvey Weinstein allegations surfaced. And he apparently has a plan to fix things.

In an interview with Fox 5 DC, Affleck, joined by his Justice League co-stars, was asked about his relationship with Weinstein, who he disavowed only after allegations came out, and about what can be done to change the culture in Hollywood. He said he’s going to follow Kevin Smith’s lead and donate further Miramax and Weinstein Company residuals to good causes: in this case, Film Independent (which supports indie filmmakers) and RAINN (Rape, Abuse & Incest National Network).

“I just didn’t want to cash any more checks from the guy,” Affleck said.

After the Weinstein allegations went public in October, several women accused Affleck of inappropriate behavior, and his brother Casey has been accused of sexual assault. In an interview with the Associated Press on Sunday, Affleck said he’s been assessing his “own behavior” and “making sure I’m part of the solution.”