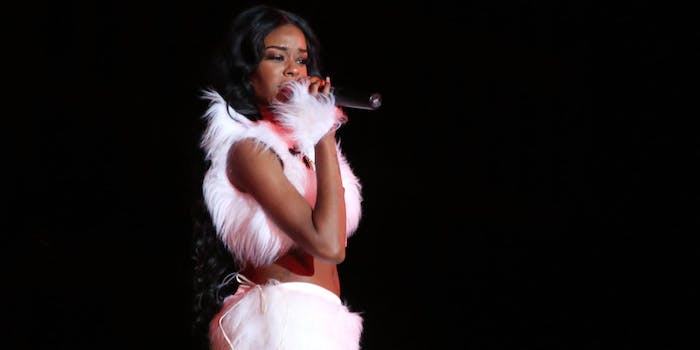 He denies ever meeting her.

The always controversial Azealia Banks is now taking on a titan of the technology world.

But Musk says it’s impossible for Banks to suggest this, telling Gizmodo Monday afternoon that he has “never even met [Banks] or communicated with her in any way.”  A Musk spokesperson also vehemently denied that he tweeted while under the influence of drugs.

Banks wrote on her Instagram story that she had been at their house “waiting for Grimes to show up and start these sessions. I have no idea when she is coming back. I’m going to wait one more day then I’m going to go home.”

In another Story on Monday, she wrote: “This trash ass beta male pig was given his start in life because his disgusting racist parents took advantage of thousands of black people.” She also called him a “libertarian shitbag.”

A message sent to Banks’ representation by the Daily Dot was not returned.

This certainly isn’t the first time Banks has been outspoken against other celebrities and musicians. She called Cardi B an “illiterate, untalented rat,” and she told Rihanna to “shut up and sit down” after Rihanna blasted President Donald Trump’s immigration ban. She’s also had to apologize for using homophobic slurs, and she’s previously been suspended by Twitter.

Musk, meanwhile, has been more erratic on Twitter lately. After a cave diver who helped save 12 trapped boys in Thailand criticized Musk’s offer to send a submarine to help, Musk responded by calling him a “pedo.” (Musk later apologized for that). He’s also developed flamethrowers that have been used in questionable ways by the public, and he made a number of bizarre comments during an earnings call earlier this year.

Banks spent early Tuesday posting content from fans and releasing snippets of new song “Elizabeth Bills,” which samples Jay-Z’s “So Ghetto.” She seems to have iced the Musk beef.