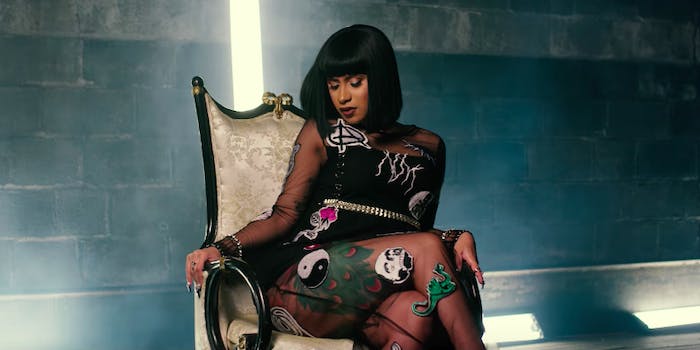 Banks also called Cardi a 'caricature of a Black woman.'

During an interview on The Breakfast Club on Friday, Banks took several shots at the “Bodak Yellow” rapper, calling her an “illiterate, untalented rat” and a “caricature of a Black woman.” She also expressed incredulity at Cardi’s rapid ascent to pop stardom, trying to contrast her music to more “intelligent” artists such as Beyoncé.

“Two years ago, the conversation surrounding Black women’s culture was really reaching an all-time high,” Banks told the radio show’s hosts, name-checking Beyoncé’s Lemonade. “There was just this really, really, really intelligent conversation going on nationally and then everything just kind of changed, and then it was, like, Cardi B.”

She added: “I’m just talking about this caricature of a Black woman that Black women themselves would never be able to get away with. Like, if my spelling and grammar was that bad, I’d be canceled. If Nicki Minaj spelled like that, we would be ragging on her all day.”

Cardi responded to the disses on Twitter and in a since-deleted Instagram post. “A woman who constantly finds joy in belittling Black women (Beyonce, Rihanna, Skai Jackson, Remy Ma) can’t try and stand for them because it’s convenient! The difference between me and you, I’ve never pretended to be or represent someone I’m not!” she wrote. “You busy trying to be a voice of reason and a representative for women of color when you can’t even reason with yourself. You can’t understand where your insecurities come from and why your [sic] not happy in your OWN skin so you think because YOU can’t figure your shit out that you can create confusion for me, make me unsure about who I am! I know who I am!”

In her statement, Cardi references Banks’ admission to bleaching her skin and the former shots she took at Beyoncé, Rihanna, and other rappers. Banks is no stranger to online controversy: She previously went on a racist, homophobic Twitter rant against Zayn Malik and tweeted about Sarah Palin, “Let’s find the biggest burliest blackest negroes and let them run a train on her. Film it and put it on Worldstar.”

Despite her current beef, Banks wasn’t always a Cardi hater. She praised the “I Like It” star in an XXL interview last summer and was spotted dancing to “Bodak Yellow” in a club in September.

Read Cardi B’s Instagram statement in a screengrab below.