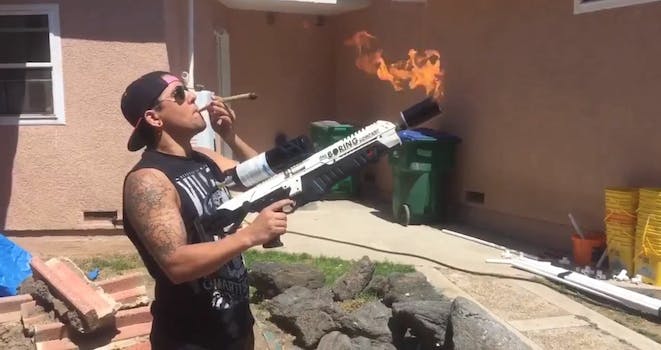 The Not-A-Flamethrower flamethrower Elon Musk can’t stop talking about is slowing finding its way into the hands of customers. To no one’s surprise, the dangerous devices are already being misused. Then again, we’re not really sure what wouldn’t fall under that definition.

The first 1,000 people received their $500 flamethrowers earlier this week at a pickup event at the Boring Company’s Los Angeles headquarters. With an opportunity to create fiery blogs, the “lucky” customers took the devices back home to give them a test run.

One guy used it to light one very long “object” he was smoking.

Others used it as a portable grill to cook a steak.

Musk even joked (we’re pretty sure) about using it in front of a baby, as one man did at the event.

Nothing makes your baby more zen than a few gentle puffs of a TBC Flamethrower pic.twitter.com/HewJf66hh2

YouTuber Justine Ezarik, best known as iJustine, made an unboxing video of the device for her 4 million subscribers. She then proceeded to shoot a massive flame in front of her as she stood in her small backyard. She later burnt a section of her garden’s artificial grass while making a cooking video.

I made a mess… but loving my flamethrower hahahahaha. Can’t wait for you guys to see these videos! @iPhonedo pic.twitter.com/SgqkMOgaaV

Others actually followed the terms and conditions, which suggested using the flamethrower to melt the sugar on top of a creme brulee. It should go without saying that there are better, safer ways to do all of these things. But hey, we get it, the “modern-day Iron Man” made a new toy and everyone is eager to blog about it.

But not everyone is so thrilled. Musk and the Boring Company have been criticized for selling these hazardous devices for seemingly no reason but to brand the startup through a joke taken too far.

let’s get one thing straight

none of you assholes needs to own a flamethrower

The Boring Company sold 20,000 flamethrowers days after they went on the market earlier this year, raising some $10 million for his tunneling company. The devices were named Not-A-Flamethrower as a cheeky way to skirt shipping and customs regulations.

Musk tweeted out lighthearted terms and conditions to protect himself from the inevitable damage that will be caused by these destructive weapons. In typical Musk fashion, the agreement includes a warning written in a Dr. Seuss-style rhyme and a liability waiver that says the company isn’t responsible for “anything I do, no matter how genius or stupid.”

Please use as directed to avoid unintentionally burning things down. For simple & concise instructions, we drew upon wisdom in great Dr Seuss book “Green Eggs and Ham”. #ThrowFlamesResponsibly pic.twitter.com/kgj8W8EOLJ

Something tells us we’ll be seeing more of the latter on social media as the other 19,000 people start receiving their units.