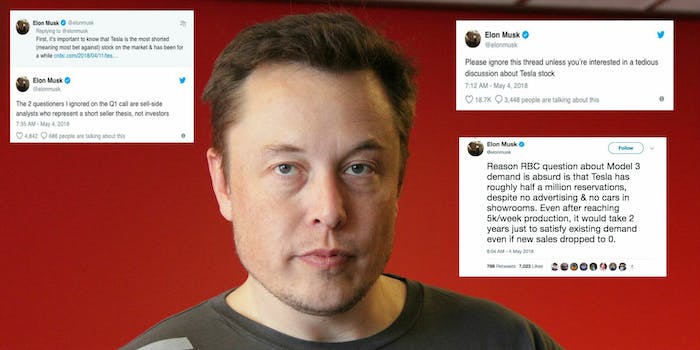 He was criticized for calling an analyst's question boneheaded.

Elon Musk lost his composure on Wednesday during Tesla’s first-quarter earnings call, and now he’s scrambling to clean up the mess. During the call, Musk shot down a question from Sanford C. Bernstein & Co. analyst Antonio Sacconaghi about capital investment requirements.

“Excuse me. Next. Boring bonehead questions are not cool,” Musk said.

In response to the next question from RBC’s Joseph Spak about Model 3 reservations, Musk, after a long pause, said, “We’re going to go to YouTube. Sorry. These questions are so dry. They’re killing me.”

The outspoken CEO spent the following 20 minutes speaking with Galileo Russell, a retail investor and host of the YouTube channel HyperChance TV, who convinced Musk on Twitter to allow him on the call despite it being reserved for analysts, investors, and the media. After fielding more than a dozen questions from Russell, Musk ended the conversation by thanking him.

His actions had immediate consequences. Tesla’s stock dropped as much as 9 percent on Thursday, hours after he avoided answering the question about Tesla’s ability to raise capital. Sacconaghi said the response he got from Musk could be a worrying sign. “This is a financial analyst call; this is not a TED talk,” Sacconaghi told CNBC. Morgan Stanley’s Adam Jonas said it was “the most unusual call I have experienced in 20 years on the sell-side,” while Eric Schiffer, head of equity firm Patriarch Organization called it “the single greatest CEO meltdown in American car history,” Reuters reports.

Musk is now on damage control, attempting to justify his unusual behavior in an unfiltered tweetstorm.

“Please ignore this thread unless you’re interested in a tedious discussion about Tesla stock,” Musk starts. He goes on to explain how investors have bet against Tesla more than any other firm, “First, it’s important to know that Tesla is the most shorted (meaning most bet against) stock on the market & has been for a while.”

Musk then gives several reasons for his unusual outbursts during the call, explaining the two people who asked questions weren’t investors but analysts who “represent a short seller thesis,” or people who back a strategy that bets against Tesla.

Musk claims Bernstein’s question about capital expenditure was “boneheaded” because it was “answered in the headline of the Q1 newsletter he received beforehand” and later in the body of the document. If his account checks out, it’s not hard to see why Musk would be annoyed.

The 2 questioners I ignored on the Q1 call are sell-side analysts who represent a short seller thesis, not investors

However, his justification for calling out the other analyst speaks to how much work Tesla still has in front of it. Musk argues it would be impossible to fulfill existing Model 3 orders even if production goals are met, due to high demand.

“Reason RBC question about Model 3 demand is absurd is that Tesla has roughly half a million reservations, despite no advertising & no cars in showrooms. Even after reaching 5k/week production, it would take 2 years just to satisfy existing demand even if new sales dropped to 0,” he said.

Reason RBC question about Model 3 demand is absurd is that Tesla has roughly half a million reservations, despite no advertising & no cars in showrooms. Even after reaching 5k/week production, it would take 2 years just to satisfy existing demand even if new sales dropped to 0.

While Musk’s defensive statements were unusual under the circumstances, they shouldn’t come as a huge surprise given the source. After all, this is the same the eccentric CEO who sold a flamethrower to the public and said he’d like to die on Mars. But Musk will need to be careful where he picks his battles. While Tesla posted better than expected losses for the quarter, its net losses were a record high of $784.6 million.

The company is relying on the low-cost ($35,000) Model 3 to be its savior. Before shutting down its factory to make systems more efficient, Tesla was making 2,270 cars a day, well below the initial goal set by Musk. He said he expects to produce 5,000 cars a week within about two months. If it doesn’t run into any more roadblocks, the company thinks it will be profitable by the second half of this year.