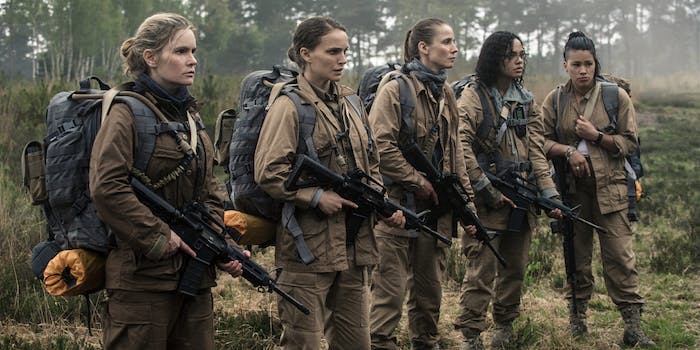 ‘Annihilation’ is a stunning sci-fi thriller

It's a movie that should be seen in theaters, not on Netflix.

In his 2014 book Annihilation, Jeff VanderMeer created a world that is thoroughly immersive, vivid, and dread-laden without naming or describing his characters. He never mentions the names of the four scientists who travel into Area X; he doesn’t really describe the otherworldly creatures they encounter. He gives them a shape but lets the reader fill in the rest. This is how it tendrils into your dreams.

In Alex Garland’s adaptation of Annihilation, we still get to explore Area X, a quarantined area of a land besieged by mysterious environmental changes. That’s about where the similarities to the book end. The film uses VanderMeer’s spectral setting to get in its characters’ heads.

Natalie Portman plays Lena, a biologist and former soldier who is grieving the loss of her husband, Kane (Oscar Isaac). He was sent into Area X on a secret mission and feared dead, but suddenly returns home—altered. After a clunky bit of table-setting that could have been trimmed back, we finally get to Area X. Lena’s mission there is one of truth and redemption, but Portman plays her with appropriate detachment. We don’t really know her true motives, and fellow travelers Anya (Gina Rodriguez), Cass (Tuva Novotny), Josie (Tessa Thompson), and Dr. Ventress (Jennifer Jason Leigh) have their own reasons for going on an apparent suicide mission.

As they journey into the Shimmer, which is slowly consuming land, the women talk about their careers, their work, and try to connect. I found myself wanting more time with them without a looming horror show. Rodriguez and Leigh in particular anchor the film, the latter playing preternaturally calm and the former mirroring the audience’s increasing anxiety. But you don’t come out of Annihilation rooting for anyone or mourning any deaths. It taps into the uncanny valley of Garland’s 2014 film Ex Machina in even more unsettling ways.

At a remove, it’s a story about women being broken down, but not in a negative way: Thompson’s physicist Josie embraces what’s infected her as a new form of creation; psychologist Ventress seeks out annihilation. Once inside the Shimmer, these women aren’t defined by relationships or their pasts. They’re defined by the things they discover and give life to in the moment, if “moments” even exist in Area X.

Before the release, producers reportedly clashed over test screenings; there were concerns the film was “too intellectual” for audiences. (There were also claims of whitewashing, though it’s only in the second book of VanderMeer’s Southern Reach trilogy that we learn about the character’s ethnicities.) The film’s thoughtfulness is refreshing, and at times mirrors the heady love-as-science draft of Shane Carruth’s Upstream Color or Melancholia’s world-ending depiction of depression. In Annihilation, depression could be seen as a biometric unraveling, and a consuming, exhilarating scene in the third act spells it out wordlessly.

The film is being released on Netflix internationally on March 12, which was a divisive decision, but it’s part of a bigger trend of sci-fi films getting pulled from theaters and redistributed. The Cloverfield Paradox is a good example of a movie that probably played better on Netflix than theaters, and the company also just rescued sci-fi thriller Extinction from Universal. It’s interesting that sci-fi is being reconsidered in this way, but the sonic and visual experience of Annihilation can’t be replicated on streaming, and it’s a shame international audiences won’t be able to have that.

After that third-act mind-fuck, Annihilation’s kinetic momentum dissipates, which is kind of a downer (in a drug comedown kind of way). We’re left with an appropriate disassociated feeling, and don’t have any more answers at the end—Garland lets us fill in the details, too.