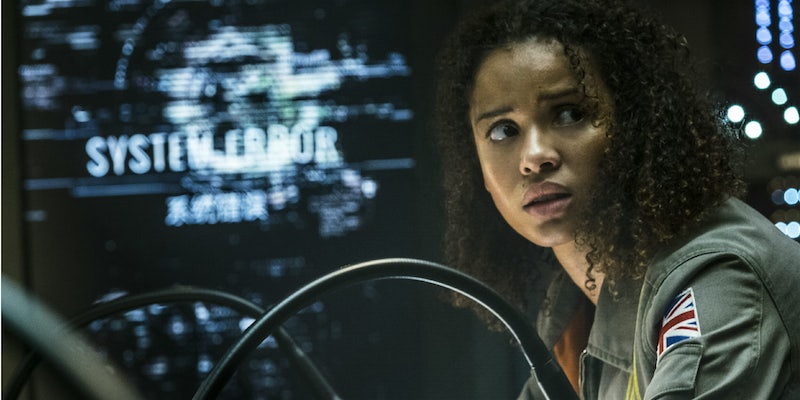 ‘The Cloverfield Paradox’ is paint-by-numbers sci-fi, but it’s an interesting experiment

Netflix turns fans into its PR machine with a wild new film.

Directed by Julius Onah and featuring Black Mirror’s Gugu Mbatha-Raw and Selma’s David Oyelowo, The Cloverfield Paradox doesn’t attempt to answer any questions from its predecessor. We never see that movie’s protagonist, but we know that power is running out on Earth due to some sort of catastrophic event. A multinational space mission is above Earth, trying to find a new source of energy with a particle accelerator, but when that fails, the words of a keyed-up conspiracy theorist (Donal Logue) foreshadow monsters to come—otherworldly menaces that have been briefly featured in the previous two films but never explained.

We don’t get more of an explanation, however. About anything that happens, really. Even when a mysterious woman is found inside the wall of the ship, any questions about why or how are dodged. We do get a final “Oh, shit” shot that neatly sets up the next film, or ties it into the first Cloverfield, depending on your interpretation. But the rest of the film feels so far removed from it; in an alternate universe, perhaps Paradox begins with that final shot and then moves into a more grounded explanation of the Cloverfield mythos. Mbatha-Raw holds the emotional center, but the majority of the film is paint-by-numbers sci-fi: There’s an Alien-esque bodice-ripper, vague space paranoia, and rote one-by-one character deaths. Unfortunately, there’s not much in the way of character development, and moments of tension or confrontation are quickly minimized.

There’s not much of a third act, either. The movie feels more like one long episode of TV. Originally titled God Particle, perhaps as a cover for the real title (10 Cloverfield Lane was code-named Valencia) the film had a rough road to distribution. Paramount dropped it after pushing back its release date several times—at one point the film was scheduled for 2017 release. Then Netflix picked it up and surprised subscribers on Super Bowl Sunday.

10 Cloverfield Lane was also something of a surprise in 2016, though it at least had some lead-in promotion. Cloverfield had found-footage authenticity to create buzz (it also came out in 2008, before Twitter was really assisting in virality). The Cloverfield Paradox had to rely almost solely on social media buzz during a major sporting event, but it also had PR assistance from some big directors like Ava DuVernay.

Sure, there’s a straight-to-video feel to the proceedings, and easy comparisons to Black Mirror (which is ultimately good for Netflix), but people are already excitedly discussing theories about the ending and the connected universes on Twitter, so that’s a win as well. Without advance promotion, we’re the stand-in PR push.

Chaos ensures on Wikipedia when a movie is released only two hours after its announced. Good going @netflix. #CloverfieldParadox #Cloverfield pic.twitter.com/H9DGcXAsgN

Haha, with no reviews on #CloverfieldParadox readily available, it appears audience opinion is pretty split down the middle. This is fascinating.

Netflix is attempting an experiment with another woman-led sci-fi movie, Annihilation, which is debuting in theaters later this month and then internationally on Netflix. Paramount sold the international rights to Netflix, not-so-subtly signaling that the studio doesn’t think the film will do well at the box office. Test screenings apparently led one of the film’s producers to label it “too intellectual.”

It doesn’t seem like this same charge was leveled at Paradox, but a day after release, the organic fan response appears to be better than the critical response, which is an interesting development. The film is lacking some major pulse points, but we’re watching the results of Netflix’s experiment in real time, and engagement means something a little different.