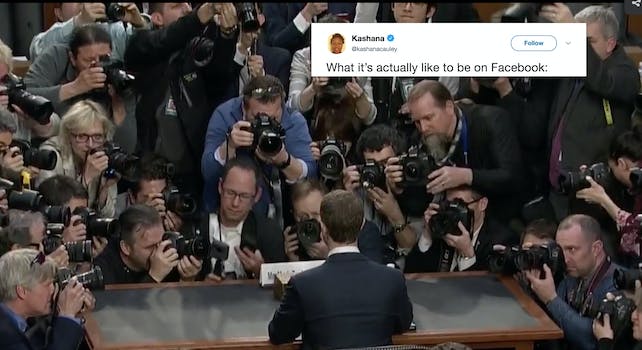 Facebook CEO Mark Zuckerberg began his testimony today in front of a committee of U.S. senators to explain why Facebook, the company he founded in 2004, couldn’t protect the data for millions of its users.

Naturally, everyone on the internet tuned in for the livestream of the hearing and reacted to it on the other social network—Twitter.

Those memes came in quickly, and a lot of them revolved around Zuckerberg looking, and acting, more like a robot than a human. This is typical commentary for Zuckerberg, as well as Silicon Valley CEOs in general. But the moment that Zuckerberg first took his seat, while surrounded by dozens of photographers pointing their lenses at him, is becoming the internet’s favorite moment of Tuesday’s hearing.

Adrian Chen compared the moment to a work by Banksy.

The new Banksy is a little on the nose pic.twitter.com/nF0iEUQflE

This screengrab has legs. It’s a photo caption contest that everyone can participate in because, well, most people have used Facebook at some point in their lives (or still use it, begrudgingly) and have a lot of opinions about the company giving away data on its users.

RT if this is your kink pic.twitter.com/0OeWVOCEf3

gonna have to untag a lot of photos pic.twitter.com/Ni3Bnskhba

when I go home for the weekend and my mom got a new iPhone pic.twitter.com/st4DrQPGUw

Me when I arrive at the club pic.twitter.com/pXXvHyudcE

Zuckerberg’s stoic expression throughout the hearing also creeped everyone out, and screengrabs of his face also made the rounds on Twitter.

When you know that you have enough information to destroy everyone questioning you pic.twitter.com/XqHk4Re0yI

In response to multiple questions, Mr. Zuckerberg repeated the phrase “two weeks” before detaching his head and throwing it into the gallery. pic.twitter.com/99qONEqbL8

That face when you just wanted a faster way to rank girls by looks and ended up installing a fascist government in the most powerful country on earth pic.twitter.com/VEaQjz9Z6s

Tuesday’s hearing also sparked reactions from other people in the tech community, like this zinger from whistleblower Edward Snowden:

And they call me a criminal. https://t.co/cmpIxY3Cc3

Remember when we were friends with the founders of social networks? Such simpler times.

tfw you aren't being grilled by the Senate Judiciary Committee pic.twitter.com/0gbOmDtJq8