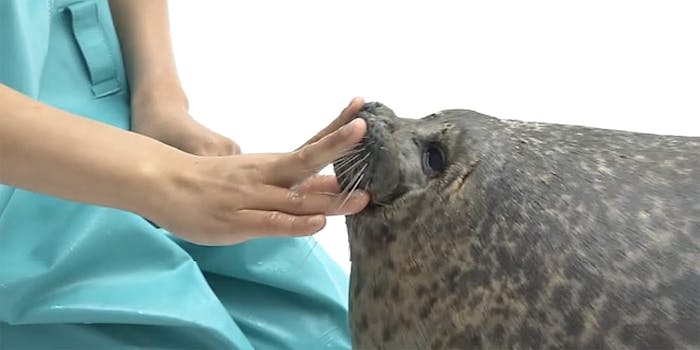 Meet Yuki, the seal that can squish her face into her body

Seals are undoubtedly amazing creatures. Some species can hold their breath underwater for up to two hours, and they’re always doing adorable things like surfing on the back of whales and smacking unsuspecting kayakers in the face with an octopus, but it turns out they’re also more elastic than most of us thought.

Check out this GIF of a woman squishing a seal’s face back into its body. It’s hard to stop watching it. How does the seal do that?

The GIF seems to come from NHK World, which is the international division of Japan’s public broadcasting company NHK (Nippon Hōsō Kyōkai). The viral tweet with the GIF, though, is in Korean. Microsoft translates the caption for the tweet as “A sore throat is never a short beast,” whereas Google Translate comes back with the only slightly less confusing “It’s never a short-necked beast.” Neither translation makes much sense, but everyone agrees that what is happening in this video is very strange.

According to NHK’s original video, the ringed seal, who is named Yuki, lives at Japan’s Osaka Aquarium Kaiyukan, where she melts “visitors’ hearts with her unusually plump, round figure.” The woman squishing her face into her body appears to be a caretaker at the aquarium. Maybe it’s a fun game the two of them play?

I aspire to be like Yuki the ringed seal, just a Sphere of Relaxation who eats 3kg of fish a day pic.twitter.com/XzPngNfGPH

Yuki also appeared in this viral tweet last week, where she is making herself into a round ball.