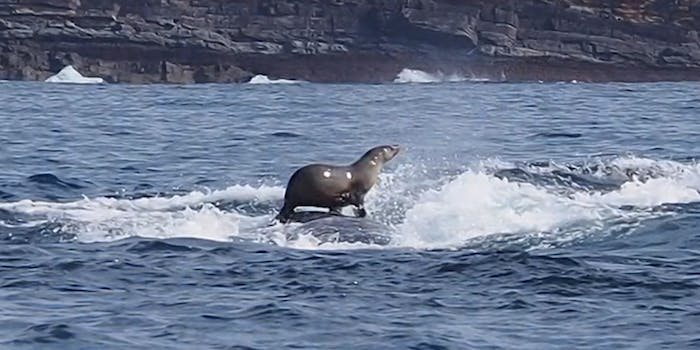 Fans of the 1991 action film Point Break are unhappy with the impending release of the remake that seems to erase the very thing that was the heart of the original: surfing.

However, this week, Point Break purists are in for a treat. Footage from the first movie’s original finale was leaked to the Sydney Morning Herald by a former crew member.

The theatrical version of the Kathryn Bigelow film concludes when Bodhi (Patrick Swayze) is on the run from FBI agent and former college football star Johnny Utah (Keanu Reeves). Bodhi and Utah collide on an Australian beach during the “50-Year Storm,” a torrential downpour that creates giant waves only an expert surfer could navigate. Agent Utah lets Swayze’s free-spirited surf guru into the surf before taking him in, knowing that he will not make it back. Bodhi is presumed dead in the film, and by fans.

Turns out that Bodhi, who had a mystical quality, actually transformed into a seal. He emerges from the water atop a whale, which is what his magic surfboard turned into.

This choice may seem to have come out of left field, but if you pay close attention to the movie, Bodhi drops numerous not-so-subtle hints about his shapeshifting abilities.

During the adrenaline-pumping chase scene, Bodhi, who’s wearing his Ronald Reagan bank robber garb, thinks to himself, “How do I get out of this? Oh, I’ll switch bodies with that pit bull to throw Utah off track.” The dog we see “Bodhi” throw onto Utah is the actual renegade surfer.

In another scene where Bodhi takes the crew on a night surf, Johnny Utah says, “I can barely do this in broad daylight.” If you pay close attention, Bodhi says, from out of frame, “You’ll be fine. I can literally turn into a seal and save you.”

Sure, these are blink-and-you’ll-miss-it details, but they add up to the logical conclusion that Bodhi actually survived the 50-Year Storm. Now we finally have proof.