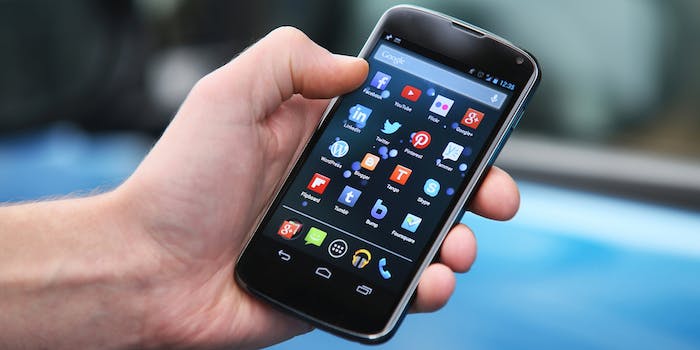 Yo, the death of the app, and the future of smartphones

While you were busy writing it off, Yo changed everything you thought about smartphones.

Remember Yo? Yes, I mean the mobile messenger app that debuted last April, the one whose only function is to send your contacts the word “Yo.”

Shortly after popping up in the app stores, Yo raised a cool million in funding, followed by a $1.5 million supplement a few months later. The cash avalanche prompted Sam Biddle of Valleywag to call Yo “proof that truly, money is a pastry puff, a trifle that can be scooped and bent and mushed around without any tethers to reality.”

Like so many others, I’d written off Yo as a bad Silicon Valley joke and forgotten about it, until I noticed one of my coworkers had it on his phone. He explained that a group of devs got together every morning before work to do coffee together. They never knew which one would be the first to arrive, so whoever got there first would simply Yo the rest.

Then it dawned on me.

Biddle is wrong. Yo is the future of smartphones. Apps as we know them are living on borrowed time.

Nearly everyone scoffs upon first trying Yo. What the hell is a messenger app that only sends one message good for?

But there is something we all get wrong at first: Yo is a revelation not because of content but because of context. In the case of my coworker and his buddies, context transformed the two letters to “I’m here, come caffeinate.”

These days, you can do even more things with Yo, including sending a link, a photo, or your location along with the notification. However, the development I’m most excited for happened last Tuesday, when Yo announced a whole new way to use its context-dependent notifications: a “store,” filled to the brim with various popular media outlets (HuffPo, DailyMail, NBC, Mashable) and brands (Teen Vogue, MTV, GE, sports teams).

Calling it a store is an odd choice since there’s nothing for sale. Rather, the options are akin to channels to which you can subscribe, opting you in to receiving a Yo whenever there’s an update. Every time your favorite Instagrammer posts a new photo: Yo. Whenever there’s an earthquake of greater than 6.0 magnitude: Yo. If a HackerNews thread gets over 500 upvotes: Yo.

There are even different services that you can activate via the power of Yo. Ping YOBARME with a Yo to receive the location of the nearest watering hole in response. Set a target price for a flight and receive a Yo as soon as it drops below your threshold. Get Yo’d when the package you’ve been waiting for arrives. For those states where it’s legal, there’s obviously a YoDispensary.

Yos are perfect for dealing with what’s happening now.

Yos are perfect for dealing with what’s happening now. It can come to you externally, an informational update that you care about, whether from friends, news sources, brands, forums, or whatever. It can be generated by immediate need on your behalf, usually in the form of an informational request or a simple action.

This is what I mean when I say apps as we know them are on their way out: Apps are going to give way to notifications.

It’s not that apps will disappear altogether. In fact, the shift towards notifications is driven by the fact that apps are wildly successful, and we’re starting to have way too many of them to navigate efficiently via a crowded homescreen.

A Yo is a notification distilled down to its pure essence. When you see it, you get via context that the guys are waiting for you at the café, or that BuzzFeed‘s published a new LOL article. However, it’s totally inert until you give it a swipe, and then: BAM, interactivity.

Think of notifications like cards. In the new Android Lollipop update, notifications are now stacked on top of each other. As you go through the cards in your stack, you determine what to do with each one in turn, and you perform that action right there on the notification screen.

A Yo is a notification distilled down to its pure essence.

Some notifications require simple acknowledgment, like finding out that the guys are getting coffee. Others are informative, keeping you quickly up-to-date with what you care about—like, oh hey, Kanye’s tweeted something absurd again. Plenty of notifications require simple action in response, though, as in posts from your friends that you want to comment on. Increasingly, we’re seeing these options show up directly in the notification itself; there’s no longer any need to open up the app.

The possibilities that this invites are exciting, especially when we bring it back to that magic word: context.

Once you’re interacting with your apps almost completely through notifications, your present context is going to become paramount for them to provide you with the information you need right now.

Ever receive a push notification from Foursquare suggesting a nearby spot it thinks you’ll like? You’ll be able to book a table directly from your lockscreen. A pop-up map will take you there. You’ll be prompted to check in with a tap, and you’ll be notified of any friends close by. I can even envision restaurants offering one-tap mobile bill pay, complete with a slider range for tip.

Hear a song you like while munching? Your device will already have picked up the background audio, run it against the database, and have the artist and title waiting for you on the lockscreen. Beneath you’ll see buttons prompting you to buy the album via iTunes or stream it via Spotify, plus a notification about when they’ll next pass through town alongside a Ticketmaster card, so you can pick up those sweet front row seats in advance.

There’s absolutely no need to open up an app for any of these interactions. This can all happen via a scrollable feed of cards on your lockscreen, or whatever the next evolution of smartphone feeds ends up looking like.

If the wearables movement finally takes off alongside the notification boom (and it just might—smartwatch models are getting sleeker every day), then notifications would clearly be pushed to your wrist, finger, or wherever.

Paul Adams of Intercom wrote an excellent piece on what a card-swiping interface OS might look like, envisioning a vertically streaming set of context-sensitive cards. Swipes up and down swap between cards in your feed, while left and right allow you to open up a card for interaction. Think Tinder, but for all your interactions.

Apps will stick around, most of the time quietly humming away in the background. They’ll drive what gets pushed to your notification stream without you having to enter the app at all.

Apps will stick around, most of the time quietly humming away in the background.

Instead of collecting apps that perform functions, we’ll cultivate an information flow that tells us what we want to know when it’s most relevant for us. There’s no question that our devices will learn from our actions over time, tracking historical preferences for information based on context (I’ve previously called this “small data”). Our smartphones will cease to be passive toolboxes and start to be dynamic, interactive streams of information.

For more intensive content creation, we’ll still want to open apps. For the large majority of our day-to-day smartphone usage, the notification will reign supreme.

Photo via highwaysagency/Flickr (CC BY 2.0)