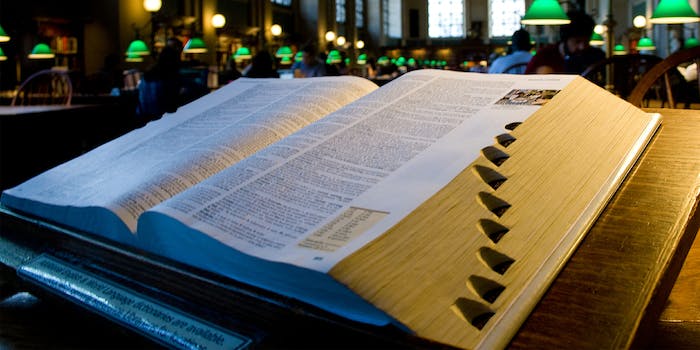 Oxford names ‘youthquake’ word of the year, forces everyone to use Oxford

The word lost out to "milkshake duck" and "broflake."

Oxford Dictionaries just announced its Word of the Year for 2017: “Youthquake.” You’re not alone if you’re wondering what the heck a “youthquake” is. For what it’s worth, Oxford defines the word as “a significant cultural, political, or social change arising from the actions or influence of young people.”

But it seems that a large majority of people never heard the word before this announcement (the author of this article included).

RT if you had never heard this word before until literally just now. https://t.co/aR8zFN7qk6

When I look back on 2017 my chief memory will be of how we all went around saying “Youthquake!” all the time https://t.co/o0Ee71HzYl

"Surely you've remembered the word 'youthquake'? It's such a common word" pic.twitter.com/Ci6y9qXzI0

The Dictionary people: the word of 2017 is #youthquake!
Everyone else: pic.twitter.com/N7T5cyxGGH

Milkshake duck, a term the internet actually used a lot in 2017, was on the shortlist for the word of the year but didn’t make the final cut. Other words on the shortlist? Antifa, broflake, and unicorn—all words we’ve heard before. Yet Oxford Dictionaries picked a word we’ve never heard of. Are we being trolled?

RT If this is the first time you’ve heard the word “youthquake” and think someone at the OED is having a laugh https://t.co/sQgbOOjYsZ

so milkshake duck, a very 2017 term, lost to youthquake, a word I have never heard before today https://t.co/ZfaDQ7P7CJ

The ACTUAL worst thing that happened today is Milkshake Duck got shortlisted for the Oxford Dictionaries word of the year but lost to “youthquake” https://t.co/GNAat0JH12

The word “youthquake” was originally coined by Diana Vreeland, a former editor-in-chief at Vogue, to describe the youth-led movements of the 1960s. Youthquake was also the name of a 1985 album by the group Dead or Alive, but, again, that’s 1985—more than 30 years ago. Is anyone still using the word in 2017?

According to Oxford Dictionaries, “As in 2017, the UK was at the heart of the youthquake, with ‘the London Look’ of boutique street-style individualism taking the high fashion houses of Paris, Milan, and New York by storm to inform a new mass-produced, ready-to-wear fashion directive worldwide.”

Some news articles that covered the British elections used the word, but beyond that, it doesn’t seem like “youthquake” really took off—at least not in the way that Oxford Dictionaries is suggesting.

Last year, Oxford Dictionaries named “post-truth” Word of the Year, which was relevant after an election cycle full of fake news. “Youthquake,” defined as a social, cultural, or political change influenced by young people, is a weird choice given the political climate of 2017. But at least it’s better than “broflake.”