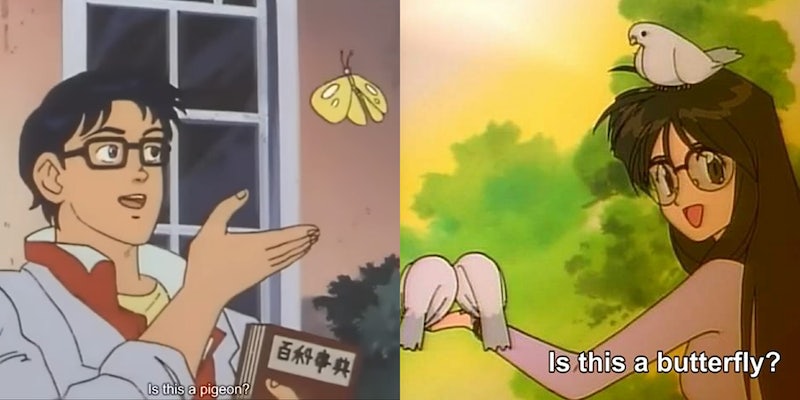 Now, it looks like the internet has stumbled upon the perfect companion meme for our pigeon-loving friend. There appears to be a woman version of the man who erroneously identified an innocent butterfly as a pigeon, and the internet is absolutely eating it up. You’re not ready for this.

Oh, you are? Okay, well, brace yourself.

We told you. You weren’t ready for it. Not only is there now a female version of the popular meme that just about everyone has put their own spin on by now, but the internet is shipping the two characters as a couple. Soulmates? Certainly looks like it.

But unlike the male version, which is from Japanese TV series The Brave Fighter of Sun Fighbird, the subtitles on this screencap aren’t real. The woman is from the anime You’re Under Arrest, and she’s not actually asking if the pigeons settled on her hand and head are butterflies. That’s a fake caption, unfortunately. It’s still funny, though.

Of course, people think they make the perfect couple. And why wouldn’t they?

Is this a pigeon
Is this a butterfly
Is this love pic.twitter.com/qj0Fmrinro

Some folks are taking an alternate route for their headcanon, implying that the man and woman aren’t a couple, but the butterfly man actually transitioned into a woman. And it totally looks like that could be the case.

We could totally see that happening. Talk about a glow-up, except for the whole being unable to identify pigeons and butterflies thing.

Whatever the case may be, though, if the two characters could ever meet with their mutual ignorance of normal, everyday animal and insect life, we wish one important thing for them.