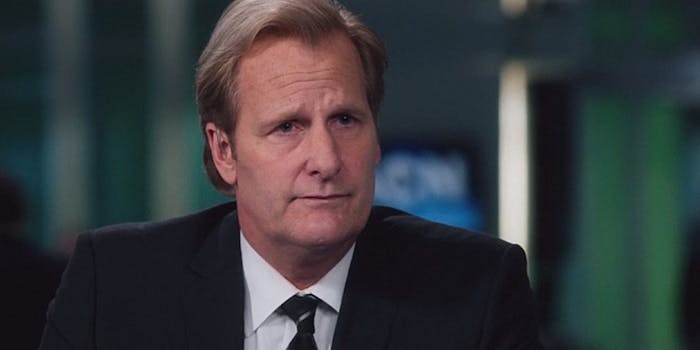 We are living through a time now where journalism is more besieged than ever. Sitting in the White House is a man who constantly rails against the spirit of the free press, the protections of the First Amendment, and the media as a whole.

Now would be the time for a journalism man—a man who does the journalism—to redouble his efforts, hunker down, maybe take a large pull of his whiskey, and deliver the truth—the unvarnished, real truth—to a public desperate for it.

Not cower and duck away. But that’s exactly what @WillMcAvoyACN is doing. That’s right, Twitter’s most sanctimonious account, which (remember) is a man channeling the voice of Jeff Daniels’ character from Aaron Sorkin’s The Newsroom (yes, this is a thing, and yes, it’s awful)—is finally calling it quits.

And now some personal news:

It's been a long, sometimes fun road, but it's time to come to an end.

Wow. @WillMcAvoyACN (That stands for Atlantis Cable News, mind you), a fake journalism man who spends his time tweeting and trying to match the esprit of Daniels’ character, who has been the subject of much scorn from Twitter, simply for his desire to tell it like it is, despite being a pretend newscaster from a fictional TV is calling it quits. In the era of Trump no less!

How will we get our truths?

Not from @WillMcAvoyACN, who changed America by holding politicians’ feet to the fire. For instance, here’s one of his (more than 125,000!) tweets, this on the scourge of gun violence.

I'm starting to wonder how much @MittRomney and @BarackObama are actually paying attention to the Aurora shooting.

As befitting a (fake) man who never missed an opportunity to pontificate, @WillMcAvoyACN, who is a fake character based (again) entirely on snippets of witty Sorkin dialogue, gave a long-winded epilogue to his time as a fake throwback newsman for the millennium.

This is not something being done in haste, but rather something I've been considering for quite some time. I was waiting for the right time.

It's become clear that the right time was a mythical idea that would never come to fruition, and so that time has to be when I was ready.

The right time being presumably when the fake Twitter newsperson had ended injustice through his incisive tweets or something.

I know this will be disappointing to a lot of people, and a welcome relief to other people. For me it is a little bit of both, to be honest.

This account was a lot of work at times, and a lot of fun at times. I will miss interacting with my followers and discussing current events.

Something one can do while not pretending to be Jeff Daniels reenacting a news broadcast challenging the Tea Party in 2011.

My friends know that I don't like the word "goodbye". Often when departing, I will instead say "be good".

Is this you talking or Jeff Daniels playing Will McAvoy as written by Aaron Sorkin talking?

The person cosplaying Will McAvoy’s ACN boss Charlie Skinner, played by Sam Waterson in the short-lived Aaron Sorkin show about a newscaster who delivers the news and the newsroom that stood behind him (hence the title The Newsroom) did not respond to a request for comment. He did, however, recently call Donald Trump bad.