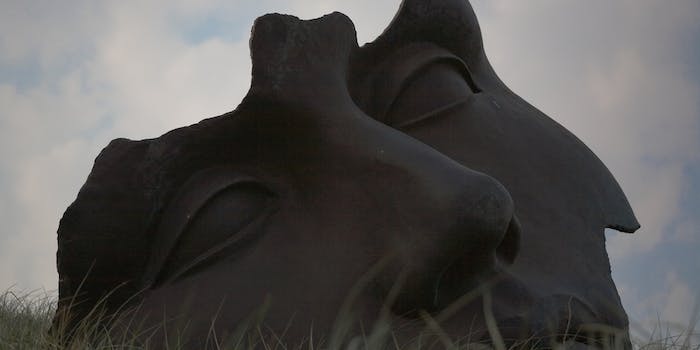 A British woman got trolled on the Internet after complaining about a pub owner's racist get up, and these incidents are all too common.

Why can’t we get over blackface?

Take the backlash against Nisha Damji, the British woman who complained about a pub owner’s use of blackface. After expressing her feelings in an online forum, Damji was greeted with online comments that ranged from lame excuses (it was an “absurdist” joke and the man’s black friend dressed up as a “black klansman”) to the outright hostile (“Yo bitch. Ask my black clientele what they think and suck my dick.”) Even worse, Damji was threatened with sexual violence, continuing a trend that has become all too common on the Internet these days (and which I discussed in an article earlier this month).

Here are the three main reasons why blackface is (almost) always inappropriate:

1) It has been used throughout history to reinforce racist stereotypes that which reinforced notions of black inferiority.

Throughout the 19th century, blackface was primarily associated with minstrel shows, which were so popular that even a lifelong and passionate opponent of slavery like Abraham Lincoln was known to enjoy them. Mark Twain even fondly reminisced about the “old n*gger shows” that lampooned common assumptions about blacks even back when they were slaves—that they were foolish, strange-looking, and worthy of derision when they attempted to integrate. Indeed, the most popular minstrel show characters were noted for either being satisfied in their subordinated station (Jim Crow was a happy-go-lucky slave, Mr. Tambo a boisterous musician) or were ridiculed for attempting to rise above it (such as Zip Coon, who was mocked for his failure to “put on airs”).

This practice continued well into the 20th century. The first film to include sound, The Jazz Singer, prominently contained the use of blackface. Even children’s cartoons were notable for using the trope, particularly the infamous “Censored Eleven” Looney Tunes. Released between 1931 and 1944, they included iconic characters like Bugs Bunny and Elmer Fudd before being pulled decades later by Warner Brothers executives.

Of course, even cartoons that haven’t been banned often contain these racist stereotypes, as indicated by the minstrelsy and pro-Confederate sentiments in 1953’s “Southern Fried Rabbit.” Disney wasn’t innocent of this either, as evidenced in cartoons like “Cannibal Capers” (1930), “Trader Mickey” (1932), “Mickey’s Mellerdrammer” (1933), “The Night Before Christmas” (1933), and the characters of Sunflower in “Fantasia” (1940) and the Crows in “Dumbo” (1941).

2) Using it today deliberately disregards the sensitivities of a long-oppressed minority.

In an editorial for Reason in 2012, Thaddeus Russell argued that blackface could be viewed positively. After explaining how the Puritan and Victorian mores about working hard and repressing sexual urges could become excessively confining for white Americans, Russell posits that “the idea of ‘blackness’—not necessarily the actual beliefs and practices of real black people—has remained the primary representation of opposition to Puritan and Victorian values.” Russel continued, “Those who reject the beliefs planted in our culture by Puritans and Victorians might consider the possibility that, like the originators of the practice, they are joining a 200-year, unconscious struggle for freedom.”

Despite his caution in clarifying that these stereotypes were not necessarily accurate, Russell’s argument and those who subscribe to it not only reinforces racist prejudices—it robs the black community of its right to determine how this offensive trope shall be contextualized in our collective cultural narrative. As historians like Howard Zinn have argued, chroniclers of American history and the broader American experience have traditionally prioritized the opinions and agency of whites over those of racial minorities.

Because blackface is viewed as offensive by African-Americans today—and it’s safe to assume any white person who uses it is probably aware of this fact—the decision to employ it anyway not only consciously disregards the feelings of blacks who see it, but implies that the interpretation of the white using it should trump those who bristle upon seeing it.

Quite often, blackface is intended to do little more than provoke laughter through shock value—see the incident with Nisha Damji above, Julianne Hough’s controversial costume last Halloween, or Ted Danson’s stand-up routine at an event for then-girlfriend Whoopi Goldberg in 1993. On other occasions, it’s simply a way of giving a role to a white actor that could (and should) go to a black one, such as Neil Diamond in The Jazz Singer, C. Thomas Howell in Soul Man (as mentioned earlier), or Fred Armisen impersonating Barack Obama on Saturday Night Live. While a case could be made for blackface if it was frequently necessitated by some overarching artistic imperative, recent history shows that this is far more often not the case.

Notably, when blackface has been used for valid artistic reasons, the goal was always to make a point about the user of blackface rather than actual black people. In Tropic Thunder, for instance, Robert Downey, Jr. plays a self-absorbed method actor so determined to win another Oscar that he becomes oblivious to how his actions might be hurting other people’s feelings (particularly those of his co-star Alpa Chino, played by Brendan C. Jackson). Although the role is used to showcase Downey’s remarkable ability to become unrecognizable as another character, the central joke isn’t on black culture and mannerisms; it is on the pretentiousness of the man underneath the make up.

Similarly, in a two-part episode of It’s Always Sunny in Philadelphia in which one of the characters dons blackface, the humor is derived from the character’s buffoonery in going to such absurd lengths to create a third-rate unofficial installment in the Lethal Weapon franchise (i.e., Lethal Weapon 5). When this basic thread is continued in Lethal Weapon 6, with Mac’s cohort (and actor Robert McElhenney’s real life wife) Dee also putting on black makeup for a key scene, the joke remains the same—namely, that these characters are stupid, insensitive, and incompetent.

Even though it’s popular to refer to the 2010s as a “post-racial” time in American history, developments from the many race-based controversies involving the Tea Party (e.g., racist placards, the “birther” conspiracy theories) to the shootings of Trayvon Martin and Michael Brown make it clear that racism is still a major problem in this country. While minstrel shows are a thing of the past and it’s doubtful many of the actors who donned blackface intended to send racist messages, it is still important to be empathetic to how this particular performance gag is inherently offensive to a community that still suffers a great deal.

In other words, the problem isn’t that those who resent blackface need to lighten up, as Thaddeus Russell argues. It’s that the people who use it need to get real.