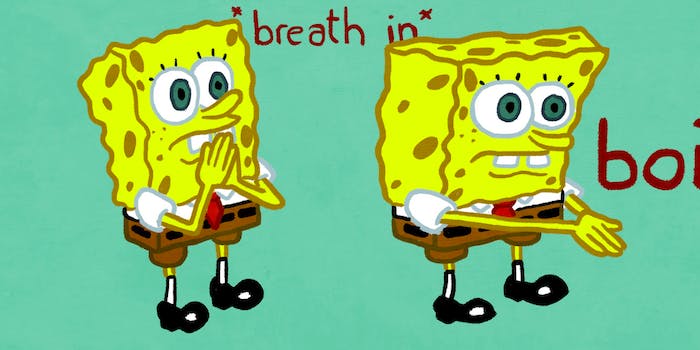 What makes ‘SpongeBob SquarePants’ the most memeable cartoon?

Who lives in a pineapple under the meme?

The memeification of our favorite childhood cartoons has become a huge part of Internet culture. Dexter’s Laboratory, Hey Arnold!, Rugrats, The Magic School Bus, The Powerpuff Girls—these shows are repurposed for memes and social media, their contexts often dismissed so their imagery can transform into something entirely different.

But there’s one series whose memeification has been the most consistent, entertaining and unpredictable: SpongeBob SquarePants.

To begin with, the Nickelodeon staple is so fucking Internet: frenetic, ridiculous, stupid, surreal—almost 100 hours of nautical nonsense ready to be mined for Tumblr and Twitter gold.

It’s interesting to remember certain scenes from SpongeBob that inevitably became reference points for my friends and me, even before memes as we knew them existed. In middle school, whenever we were assigned an essay, we’d imitate that iconic sequence in “Procrastination,” where SpongeBob begins to write a paper for his boating school class.

“And some of these, and some of these” he enthusiastically utters, orchestral horns and strings soundtracking what we assume to be one of the best essays ever crafted by an animated sea sponge, only to reveal that he’s written one word:

It’s one of the most relatable moments in cartoon history, the sequence perfectly capturing how horrible procrastination can be. Now, over a decade later, not only can I act the part out IRL, but I can send it to a friend via social media or text, because SpongeBob SquarePants isn’t simply a cartoon anymore, but an Internet phenomenon.

GIFs, photoshops, Reddit and Tumblr conspiracy theories, remixes, videos—SpongeBob is being repurposed in countless ways. Sometimes it’s simply to highlight a recurring gag throughout the series, such as the infamous “My Leg” quote, which was prominent throughout the first four seasons, then disappeared, and finally returned in season six.

Sometimes we get incredible mashups like this one, which brings together SpongeBob and Breaking Bad.

Then there are the videos that feed into Internet troll culture, where a several-second scene from a SpongeBob episode is made into a 10-minute (or even 10-hour) loop.

But in an age where loops are commonplace, this is barely scratching the surface of SpongeBob‘s relationship to the Internet.

This comes from one of the best episodes of season two (and arguably of all time), “Frankendoodle,” where SpongeBob draws a crude figure of himself (DoodleBob) that literally tries to erase him from existence. The episode first aired in 2002; in 2014, DoodleBob resurfaced because of comparisons made with Young Thug, a  rapper whose incoherent rhymes inadvertently brought the “Me Hoy Minoy” antagonist back from its undersea grave.

Other rap-related SpongeBob connections that deserve acknowledgment: A sequence from season one episode “Tea At The Treedome” was synchronized to footage from Nicki Minaj’s music video for “Anaconda.”

The audio is taken from a moment in which SpongeBob, trapped in Sandy Cheeks’ waterless treedome, tries to fight his thirst—which is why it fits so well with Drake’s part in the video, because he’s trying to fight a thirst of his own.

New SpongeBob memes to pop up recently including the “Mr. Krabs blur,” which trades on a still image taken from the season two episode “Patty Hype.” Perfect for “The Face When” (commonly referred to as TFW) responses, the picture depicts a confused Mr. Krabs surrounded by angry fish. According to Complex, the first appearance of the meme seems to be from January 31 of this year.

When you just wake up from a nap and your parents already yelling at you pic.twitter.com/ksf0Sbop8P

But SpongeBob SquarePants has also taken on a new life in Internet folklore, with short stories and conspiracy theories based off the cartoon series. The most popular early example of this was “Squidward’s Suicide,” a creepypasta about a lost SpongeBob SquarePants episode where a more-morbid-than-usual Squidward Tentacles kills himself. The video was uploaded to YouTube in 2012 and immediately removed, but by then people were beginning to wonder if such an episode actually existed.

In 2013, the question of the episode’s existence was put to rest when an alleged creator of “Squidward’s Suicide” revealed in a Reddit post that they wrote the story on 7chan back in 2006. (Click the image for higher resolution.)

“Boredom was the catalyst and reading creepypasta was inspiration,” the user explained in a separate post. “As I said, at that time, SpongeBob was untouched, and it was a time where kids who grew up on it were old enough to browse the *chan boards. So I used it.”

This gets to the heart of SpongeBob‘s enduring popularity as a source of memes, even though it’s been years since new episodes aired: It cemented its cult following right as the world made the shift to Web 2.0, and right when the kids who loved it began to develop their voices online. And for all its patent absurdity, it always had dark undercurrents—a pairing that proved relatable for fans through adolescence and beyond.

In 2014, show writer Casey Alexander put the final nail in the “Squidward’s Suicide” coffin when he denied that the episode ever existed.

Still, the story foreshadowed the rise of long-form stories and discussions on SpongeBob, including those that tackle the societal issues of Bikini Bottom and the likelihood of Mr. Krabs being a Sith Lord, to take just two examples. Whether the creators of SpongeBob SquarePants realize it or not, they produced entertainment that not only resonates with Internet culture, but reflects it, too. The series is given a new life time and time again through the eccentric imaginations of Internet users across the world, keeping the strange spirit of SpongeBob alive, meme after meme.