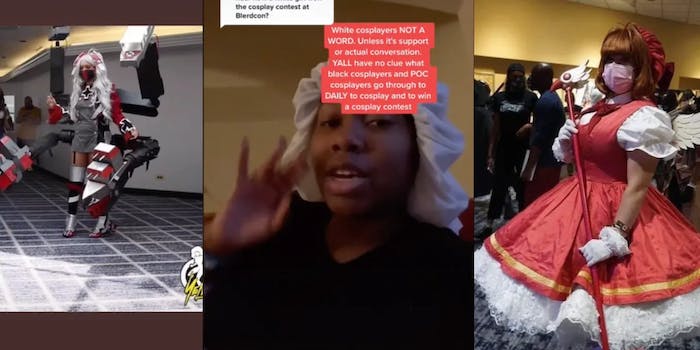 'I am sorry for centering myself in a space that was not mine to do so,' the Blerdcon winner tweeted.

Nerds everywhere are speaking out after a white woman won a costume contest at Blerdcon in Arlington, Virginia this past weekend.

The convention is named after “blerds,” which is a portmanteau meaning “Black nerds.”

Blerdcon is “an event that highlights and celebrates Blerd culture and creates a marketplace of ideas where sharing that culture can take place with proper context, attribution and positivity in an inclusive environment,” according to its website.

A cosplay costume contest was held during the convention, and self-proclaimed blerds are angry and disappointed that a white woman was given first place. Some people expressed that white inclusivity is not always necessary and there needs to be space for Black cosplayers to thrive.

Dressed as Sakura from Cardcaptor Sakura, the woman who won has apparently deleted her social media pages after being “bullied” because of her win, according to a forum on Lipstick Alley. However, it appears she kept her Twitter, posting a thread apologizing for entering the competition in the first place.

“I am actively in the process of returning the prizes and have stepped down,” part of the statement reads. “I am sorry for centering myself in a space that was not mine to do so.”

Twitter user @PhreshxBear said they encouraged the woman, who is their friend, to enter the contest.

“I understand the upset this has caused, but I would rather have that upset directed at me rather than at her,” the user tweeted. The tweet has since been deleted.

Across social media, many people reiterated that the woman should not have entered the contest at all, let alone won.

“So a white person won the cosplay contest at #Blerdcon. That just doesn’t sit right with me. We can’t even win at our own events,” tweeted @atwash101.

“Nah. The problem is she entered the contest in the first place. As a yt cosplayer I’m not ok with that. That is not the place for you to try and show,” commented @jara_b_sewing on a TikTok posted by @capnkenknuckles.

“This is very disheartening. There could have been ways to rectify this issue but damn!!! Like I can’t even really fault the judges for doing their job impartially but the centering of those who aren’t Black or PoC, in a place that exists specifically to do so, is [a] bad look,” tweeted @DocRuffin01.

Others are arguing that the judges should take ownership as well.

“Nope fault the judges. They were talking crap about the black contestants. Judges are black too and sometimes the judges help make the criteria for the contest. Everyone is at fault,” @Leighanncosplay said.

One judge, Dax Martin, tweeted a series of statements about the outcome of the contest:

They ended the thread with:

“Hopefully next year we can avoid this kind of situation but in the mean time I just wanted to address what’s going on and urge EVERYONE to leave the contestants alone they don’t deserve any of the bullying/ backlash/ or hate. Thank you. -DAX!”

This is not the first time a non-Black person has won the cosplay contest. This year, many argue that other costumes were more deserving of the win.

“What I’ll say is it was alot of really really dope ass cosplays in my opinion that should’ve won over the supposed winner. Theirs was just better no knock at the winner but it was others more deserving #Blerdcon,” tweeted @Jus_A_Rebel.

The winner also received a guest spot at Awesome Con in August, including a promo table, judging slot, and an official announcement. She has since said she’s returning the prizes.

“Now I want to cry cause if the winner was black or POC. The amount of exposure they would have received from this…could be life changing. Look at the winners prize! #blerdcon why???” said @Leighanncosplay.

When asked about the issue, Blerdcon directed the Daily Dot to a video statement issued on its Facebook page in which Hilton George, the convention’s founder, addresses the controversy.

“We are an open space, we are not members of a private organization… we don’t turn people away…,” George says. “There will always be people there who are not Black, who are not people of color, in participation.”

He goes on to denounce any bullying that the judges and contestants may have received and says, “If I find out that’s something you’re doing, you’re banned.”

He defends the judges and explains background and criteria for the competition, as well as discusses the convention as a whole. He also encourages more Black people to enter the contest going forward, but folks say his statement missed the mark.