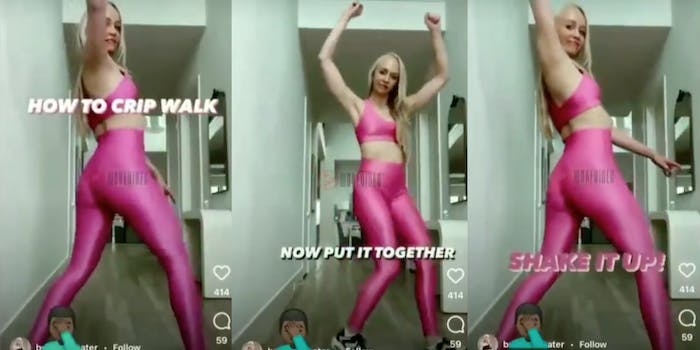 A white TikTok user is catching heat online after attempting to teach her followers how to Crip Walk.

Created by the Crips street gang in the 1970s, the iconic dance move became a fixture in popular culture after being popularized by rappers from the West Coast.

The TikTok user’s rendition of the dance, which mostly involves intricate foot work, was widely ridiculed as it spread across social media.

“They Have Gentrified the Crip Walk!” @wokevideo wrote on Twitter. “Don’t be surprised when you see ‘Licensed Crip Walk Classes’ being taught for $100 an hour.”

The popular comedian @KevOnStage also weighed in, arguing that the woman couldn’t perform the dance herself, let alone teach others.

“How you going to teach someone to do what you don’t know how to do,” he said.

But most just couldn’t help but laugh at how cringe and awkward the TikTok user’s attempted Crip Walk was.

“That video of the white lady teaching people how to ‘crip walk’ is the worst thing I’ve ever seen this year by far,” @BoLewis_ said.

The criticism was significant enough that the TikTok user, who only has 53 followers, opted to pull down the video.

But other TikTok users could be found referencing the controversy in the comment section of her other videos.

“Why’d you delete the crip walking video??” @mirandz_ asked. “I didn’t get a chance to drag you.”