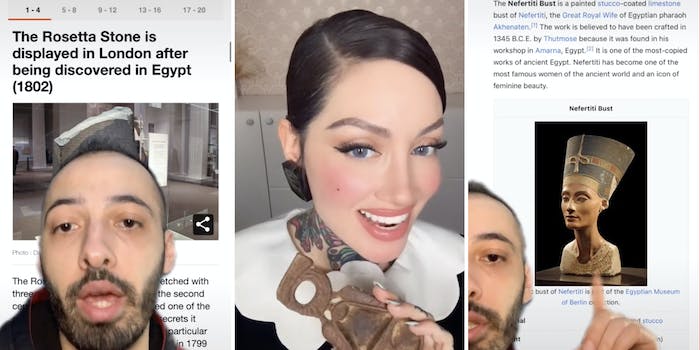 'It makes my blood boil.'

Makeup artist Erin Parsons decided to show her TikTok followers the genuine Ancient Egyptian cosmetics spoon she keeps with her makeup collection, and she promptly got schooled on the legacy of colonialism and artifact theft that allowed her to own it in the first place.

Though Parsons has since taken both her original and later apology video down, going back to her usual content of makeup and hair tutorials, excerpts remain in the many stitches people created to talk about the violent history attached to white ownership of such artifacts.

TikTokers like @islammc_ and @_anastasiagracia_ used Parsons’ TikTok as a jumping point to talk about the culturally significant artifacts looted by Western colonial powers—which are still held in European and American museums to this day—and to call for their return to their countries of origin.

@islammc_, in particular, took issue with Parsons providing instructions to her followers on how to acquire their own Egyptian artifacts and found her apology, with the claim that she didn’t know they were stolen, lacking. Despite Egypt formally gaining its independence from Britain in 1922, the stolen artifacts trade remained, even expanding during the early 2010s as smugglers exploited political instability for profit. These artifacts were often looted directly from unexcavated sites, damaging them in the process and making it difficult or impossible for legitimate archaeologists working with the permission of the Egyptian state to gather data.

Describing the contents of Parsons’ video as a form of modern orientalism, TikTok user @_anastasiagracia_ talked about how disturbing it is to see white people celebrating their possession of these artifacts, when that possession is built on violent conquest, the desecration of burial sites, and theft from the rightful owners.

Despite her removal of the videos, the TikTok community isn’t willing to let it go, with many posting questions about the artifact and the missing videos on Parsons’ newest uploads.

The Daily Dot has contacted Parsons about her video and what she intends to do with the cosmetics spoon and will update this article if she responds.