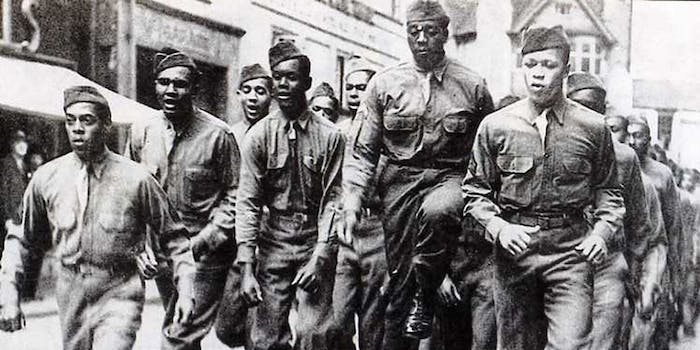 9 easy things white people can do online to challenge racism

It's time to be part of the conversation.

Engaging discussions about racism on the Internet often proves difficult for white people who are new to the conversation. But it doesn’t have to be.

Unfortunately, because of the world we still live in, there’s rarely a moment when race isn’t being discussed on social media. Take, for example, video that emerged recently of white soccer fans in Paris actively preventing a black man from boarding a train. In the process, he was repeatedly pushed and racially harassed, as the group of mostly white men shouted, “We’re racist, and that’s the way we like it.”

It’s one not-so-subtle reminder that racism isn’t going away anytime soon, either in America or abroad. Instead of running away from facing this reality, let alone denying that racism is still a problem, white people who otherwise aren’t tuned in would benefit from taking a more active role to support people of color. Incidents like what happened on that train in Paris may not happen nearly as often anymore, but they’re still representative of a routine experience for many people of color, even with some of the gradual progress already made.

So when these things happen, it’s a good opportunity for white people to become better educated or even active in working to dismantle the power and privilege that makes racism such an evil institution. And with many avenues available on the Internet, it’s relatively easy to get involved in a responsible and principled manner.

Chelsea fans. Save your spite for those on the train, I’m sure you’ll want to see them banned from holding season tickets at your club.

Whether it’s a trending hashtag, a blogger with a large following, advocacy organizations, or journalists, plenty of people of color on Twitter routinely discuss racism as it relates to current events. When a controversial issue emerges, such as a police brutality protest, a racially motivated shooting, or the latest epic racial fail from the entertainment industry, make a point of following the conversation as things develop. Many of the perspectives won’t necessarily show up in news articles, so consider it required reading to supplement or offset what you’re learning via reports.

2) If you’re confused by what certain terms mean, try Googling before tapping someone for info

Not everyone is going to know what words such as “microaggressions” or “intersectionality” mean immediately, as some concepts are still largely academic and haven’t reached high levels of mainstream recognition just yet. As with any other word or idea that may be new for an individual, pause to research what it means and its context in a conversation about racism. More than likely, you’ll encounter articles, blog posts, videos, and other materials that can quickly get you up to speed—allowing you to continue following these conversations with ease.

Although it’s tempting to center one’s own point of view during an important discussion, that’s often not the best way to act in a supportive and responsible manner. When people of color are openly airing their grievances or offering their analysis of an event with racial implications, it’s better to listen and help elevate those perspectives—because they’re coming from people who are directly affected.

For example, after a Staten Island grand jury voted not to indict the officer who killed Eric Garner, the hashtag #CrimingWhileWhite emerged as a well-intentioned response from white people who understood that they’re treated differently by law enforcement, even when they’re not the perfect victims. But as that happened, black people and other people of color were already sharing their pain, and the hashtag, for many, read as unnecessary humble bragging. Eventually, #AliveWhileBlack was created to redirect the conversation back to the experiences of black people who had been racially profiled or endured mistreatment at the hands of police.

17 y/o – Drove to Kroger to get mom Nyquil. Pulled over unexplained. Asked why I was in my neighborhood. 4 backup cop cars. #AliveWhileBlack

4) Recognize when it may not be best to insert yourself into a tense online dialogue primarily involving people of color. Sometimes, it’s better to just listen and ask questions.

Although some issues have broader societal implications, other topics—such as the use of the “N-word”—are more about community dynamics that don’t need any outside input. That’s what set many off last November when Piers Morgan decided to devote an entire op-ed to the topic. As a white man, Morgan felt he could tell black people how to feel about a word that he’ll never be subjected to, either in the form of a slur, a pejorative, or a reappropriated term of endearment. And he didn’t back down from lecturing black people on Twitter when called on it.

During a moment like this, when it’s clear that the affected community has an issue to sort out on their own terms, taking a back seat to the discussion is a much more respectful approach.

5) Be OK with making mistakes sometimes. But be open, honest, and accountable about those mishaps—it’s part of the learning process.

Of course, people sometimes exercise poor judgment or mess up without knowing any better. When that involves an issue as complicated and tense as racism, the response to these errors will vary: Some will politely offer a course correction, others will express outrage and upset. However, it’s not about policing feelings of people of color who live with the effects of racism on a daily basis. Instead, it’s about building a relationship with communities you’re intentional about supporting and allowing people of color to lead the way. If you make a mistake, take responsibility, apologize, and commit to listening and educating yourself.

6) Avoid using the Dr. King and Obama defenses at all costs when encountering a challenging viewpoint about racism

“You’re judging me because of my white skin and not the content of my character. Dr. King would be ashamed of you.”

“We have an African-American man who’s the president of the United States. What could black people still possibly be complaining about?”

Dozens upon dozens of black people online have heard variations of either sentiment when they share a viewpoint or an article that advances a strong challenge on an issue of how racism affects everyday life, especially on matters of culture and politics. Just because someone said the words “white privilege,” “cultural appropriation,” or offered any number of critiques that call out the subjugation of blacks and other people of color, it doesn’t mean that person harbors any distinct prejudice against white people. Before being put off by any mention of whiteness, take a moment to actually think about what’s being said and try to understand the pain being expressed by someone whose experiences may vastly differ.

Having a black president clearly hasn’t eradicated racism or ushered in a so-called post-racial era. And although Dr. King’s words exist in their own time and context, he wasn’t particularly shy about calling out racism and white supremacy for the ills these systems created.

7) That also goes for any claim that “reverse racism” exists

Although anyone can harbor prejudice, remember that racism isn’t simply about one person’s attitude toward an entire group of people. Racism is about systems in politics, the economy, media, society, and other vital areas of life where one group wields enormous power and privilege over other racial groups, who end up marginalized in the process. So when a person of color discusses an instance of racism, questions such as “How would you react if this were a white person instead?” are often misplaced.

Thankfully, many books and essays are available online for further reading, some even for free. If you’re still in college or have a library membership with access to online journals and ebooks, take full advantage of the ability to educate yourself with an interesting book that explores issues of racism. (And if at all possible, do try to purchase texts as to financially support the work, since there’s labor involved in both researching and crafting these theories and perspectives.)

If you read an interesting article, share it on Facebook along with the quote you found most resonant or compelling. If you see an interesting tweet, retweet it and ask your followers to share their thoughts. Don’t be afraid of having these discussions with friends, let alone demonstrating that you’re tuned in. Even though you may still be in the process of learning, you could unwittingly end up helping someone else better understand issues of race, too.

Photo via brizzle born and bred/Flickr (CC BY SA 2.0)