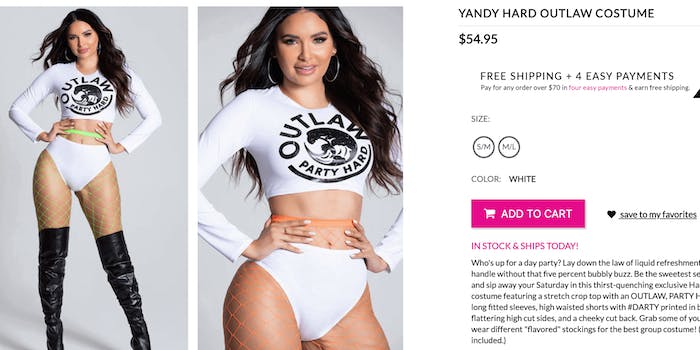 The Yandy White Claw-inspired costume sold out in a week.

The rapid demand for spiked seltzer White Claw has plummeted the drink into a national shortage. One lingerie company is attempting to provide for the masses with a White Claw-inspired Halloween costume.

Yandy is hopping on the hard seltzer trend with its new “Hard Outlaw” costume. The two-piece outfit contains a take on the White Claw logo, along with the words, “Outlaw Party Hard” printed across its top.

“Be the sweetest seltzer on the shelf and sip away your Saturday in this thirst-quenching exclusive Hard Outlaw costume,” the costume description reads.

A Yandy spokesperson told the Daily Dot that they recommend styling the costume with neon fishnets “as the perfect way to ‘flavor’ to your look.”

“It didn’t take much convincing at all to know this was a great exclusive for 2019,” the spokesperson said. “We create things and have to hope that the public will get behind the sexy spin or pun. We’re thrilled that everyone loves this costume as much as we do.”

White Claw enthusiasts can buy the costume for $54.95. Although one customer gave the outfit just two stars. “Top fits tight looks good but bottoms no matter pulled up tight or loose looks like a diaper and has extra slack in the crack,” Aja W. wrote.

Yandy sold out of the costume within a week of its release (the costume is back in stock), the spokesperson told the Daily Dot.

“Just as the nation is facing a #darty threatening shortage of spiked seltzer, Yandy is also feeling the impact of the sudden success of the YANDY HARD OUTLAW costume,” the spokesperson said.

So it seems there’s going to be just as many White Claws walking around as there are in the hands of partygoers come Oct. 31.