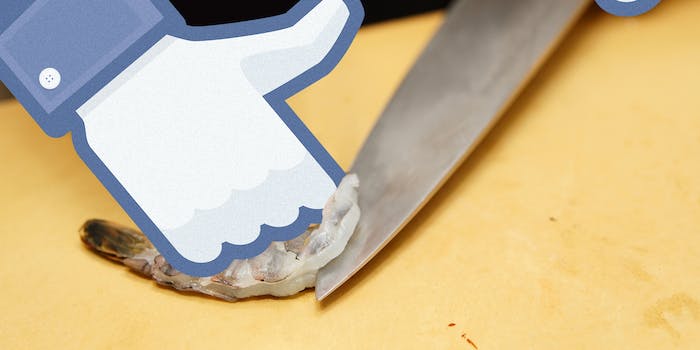 The gatekeeping text on Facebook is something chronic users don’t see. Accustomed to saved passwords and retained browser history, most folks dive straight into their feed rather than glancing at the “connect with friends and the world around you on Facebook” tagline on its log-in page.

To Facebook, it seems as if the world around you has a fairly conservative bent. The company’s forced use of “real names” has alienated those in the LGBT community, minorities, and netizens of all stripes who just want a bit of anonymity. Last year, accounts with monikers that Facebook deemed suspicious were locked, with the prize of reinstatement attainable only if you sent the social media giant some identifying documentation. Little was done to address user concerns other than the issuing of a broken promise to allow the use of aliases under special cases at the tail end of 2015.

Facebook once again appears to be turning a blind eye to the mounting concerns of its users, specifically those involved in the world of weird Facebook. Pages like I play KORN to my DMT plants, smoke blunts all day & do sex stuff have vanished under mysterious circumstances—a troubling development for those using the social media platform as a creative outlet.

The company’s latest slight is the worst of both worlds, seemingly a marriage of real name issues and the shuttering and reprimanding of Weird Facebook pages and groups. 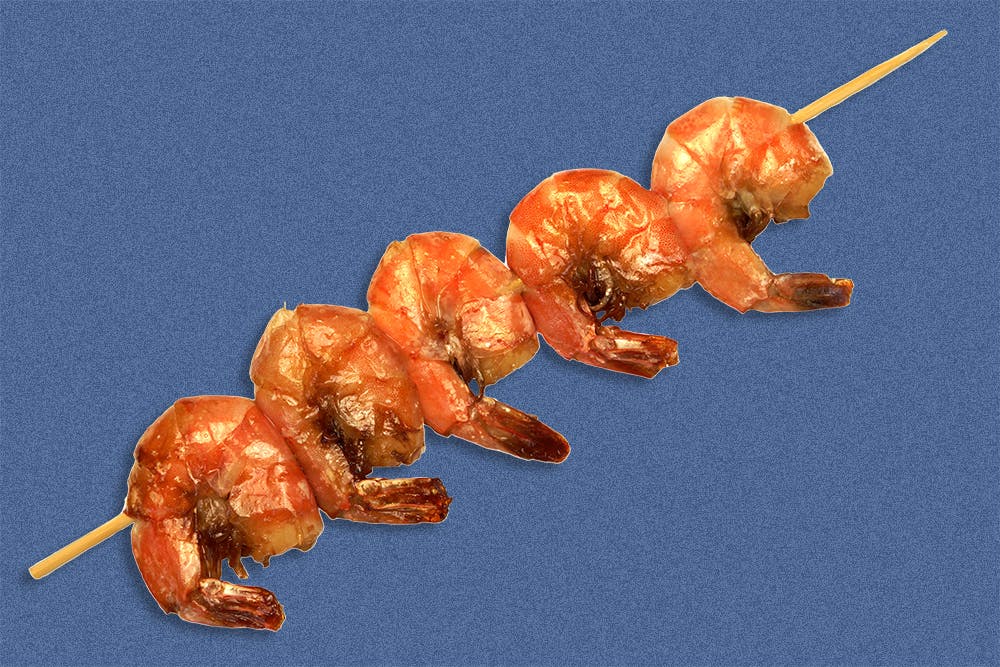 The admins of Where my shrimps received a startling email the morning of July 11. Access had been revoked, and they were being removed one by one.

“We all knew what had happened,” said Raj, an early admin of the page who joined when Where my shrimps was nearing 800 likes. “I quickly made a post on our backup page to explain that we have been hacked and don’t know what will happen. It really hurts to see the page you helped to grow to 60,000+ likes posting bad memes and clickbait.”

For a user to somehow infiltrate the page, the proverbial keys lay in the log-in information of an admin who watched their access disappear right before their eyes.

According to another admin we’ll call “Hank,” who linked up with Where my shrimps a few months ago, the hacker had been brazen from the start, bragging about the takeover prior to Where my shrimps admin even announcing that there had been a breach.

Hank’s foray into page administration came after he posted a barrage of finely crafted memes. Since the takeover, he has acted as de facto representative when dealing with Facebook, submitting tickets and providing evidence of the hack in hopes of reclaiming the page. He’s been corresponding primarily with a Facebook employee known as Hector. It’s unclear whether Hector is a pages team member in the flesh or an automated form-letter machine, swatting at concerns like a distracted cat.

All seven admins interviewed for this article were skeptical.

“We submitted screenshots of this hacker claiming complete ownership of our page and the hack of it, and proof that he isn’t just fooling around, yet Facebook answers two days later basically telling us that our proof is invalid,” Hank said. “What people don’t realize is this person hacked one of the admin’s personal accounts, getting access to his personal messages and information. But when it comes to our privacy and getting our page back, it’s almost like Facebook doesn’t care.”

The hacker, who goes by Squishy, claims that Facebook has been just as silent with them.

“The only people who have contacted me about this whole thing are two ‘clever’ fanboys who were looking to take the page back from me [and] get a confession,” Squishy said, noting that they’d already delivered two on their personal Facebook page. 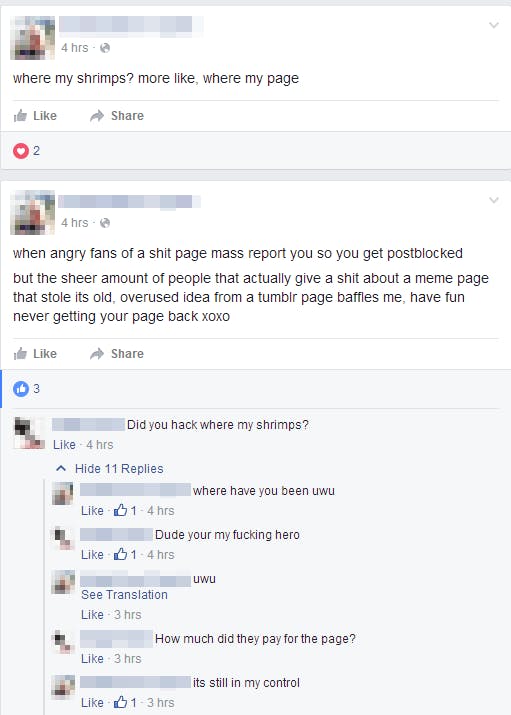 Using tools dedicated to exploiting security flaws for the sake of anti-forensics and privacy, Squishy was able to easily obtain the information they needed. The takeover, they claimed, was a means to test out “newfound abilities.”

“It was a relatively easy takeover, but then again I know exactly what I was doing and have gotten into places beforehand,” Squishy stated. “But this is probably the first and last Facebook page I take over.”

Neither the admins nor the hacker had encountered each other prior to the hack. In fact, it appears as if they may not have ever been in contact. Squishy had trouble recalling the name of an admin a source had given him. The idea of a hacker having sympathetic supporters within Where my shrimps certainly illustrates a deeper rift than the commandeering of a popular meme page for the sake of clickbait money.

“They use the same tropes with the whole lobster, although they changed it to ‘lobbo’ and even the exact profile picture. It wasn’t until I believe June where someone decided to tell them that their idea was stolen,” Squishy lamented. “I have no idea why I didn’t do it sooner.”

The Tumblr page was active as recently as the beginning of this year. A snapshot preserved on the Internet Archive shows a smattering of shrimp memes and answers to life’s pressing questions—with a crustacean flavor, of course.

Squishy claimed that they’re not the only one against the Facebook page. “I saw that pretty much no one in the community I was a part of liked this page,” they explained. “In fact, they all thought it was stupid and annoying. They later gave me a bunch of praise for doing what I did to the page.”

The Where my Shrimps admins were launching a movement in the meantime, signing up for Twitter and taking note of the #BringBackWhereMyShrimps hashtag. A Change.org petition pleading with Facebook to return the page to its rightful owners has nearly 600 signatures.

As of this writing, the Where my shrimps 2: STILL lookin community has 10,844 members—a slight fraction of the 61,000 who first convened at Where my shrimps before the clickbait takeover. Admins are hoping their numbers return. Their hopes for the original page have all but been extinguished. (A request seeking comment from Facebook yielded a promise from a security communications employee that we’d receive information as they looked into it.)

Where my shrimps gave up their fight with Facebook directly a week after the hack. As Hank noted, Doggos had faced similar problems. So, too, has I want to live inside a MEME. As the issue of ownership jumps toward security concerns, Facebook pages and groups across the weird meme spectrum have begun sharing tips on better practices and preventative measures.

“Many other Facebook pages have been sharing our new page and letting their fans know what happened to our page,” an admin known as Turkmin explained:

“We also let them know about how people can claim your page in business manager and boot admins out of the page before the one week period (in which you can not remove the original admins) has expired. There has been outrage directed at Facebook over this issue and everyone has been spreading the word to secure their pages in Facebook business manager. People are thankful we let them know and we have gotten lots of love and support. The Facebook meme community stands in solidarity with many other pages that have been hacked just like our own.”

“Just a few days ago, I found out about the common method to take over Facebook pages and wrote a small article about it on our new page to inform other pages how to protect themselves against it. Needless to say, we got a lot of pages sharing that post to inform their friends and their own administrators about it,” added Tobias, aka Tempura.

The hack itself has stressed out admins, some of whom describe the experience of relinquishing Where my shrimps as going through all five stages of grief. To see the type of memories Facebook ordinarily (and relentlessly) promotes disappear into a void of clickbait and forgery has been devastating. So, too, has been the painful attempt to recoup the loss and migrate memes and poems to the backup group.

This certainly wasn’t what Facebook CEO Mark Zuckerberg had in mind when he turned Harvard’s rolodex of students into a digital KIT (keep in touch) endeavor. Following the site’s public rollout to students and subsequent play to the general public, its reach skyrocketed with no signs of stopping. Facebook is what makes and breaks the traffic of sites like this one, and what’s earning many influencers their income.

It’s also where some of the most creative minds online are forging their own path in the disparate sea of SpongeBob memes and pandering slang. Prior to Where my shrimps’ commandeering, the page had built its own brand of witty macros dedicated to its preferred sea creature while warring with its mortal enemy, the lobster.

“We never intended it to be such a big thing,” Tobias said about the page’s war against “lobbos.”

Hank takes a rather aspirational approach to the rivalry, which kicked into high gear after Turkmin admitted that his wife had cheated on him with a lobster while he was vacationing in Greece.

“The rivalry is shrimp versus lobbo,” Hank explained. “The lobbos do anything they can to hurt other people’s shrimps, and we’re certain that they’ve kidnapped ours as well as others. Some people have their shrimps, some others don’t. Almost like happiness in the real world. We’re just trying to find our happiness.”

Whether the Tumblr begat the Facebook page or simply served as inspiration, Where my shrimps took on a life of its own that no one seemed to expect. It’s also brought the pitfalls of Facebook groups and pages to the forefront.

“I think this is a really big point that has to be fixed by Facebook,” Tobias said. “Because I know that there are people out there losing their page right now, as we speak. And they will be left in the dark by the Facebook support team. And without a strong community behind them they won’t even try to do anything further after getting a negative response from Facebook. Many pages, especially smaller ones, are doomed at that point.”

In failing to address the hijacking of pages and weird Facebook groups for the sake of clickbaiting profit, the company has inadvertently succeeded in one of its main missions: bringing people together. Admins rave about the support they’ve received from fans and fellow creators willing to lend an ear or spread the word.

Update 12:00pm CT, July 27: Where my shrimps admins have been in contact with Squishy, who subsequently admitted that they are not the hacker in question.

According to Squishy’s personal Facebook page, however, it appears as if they handed off log-in information to someone else. 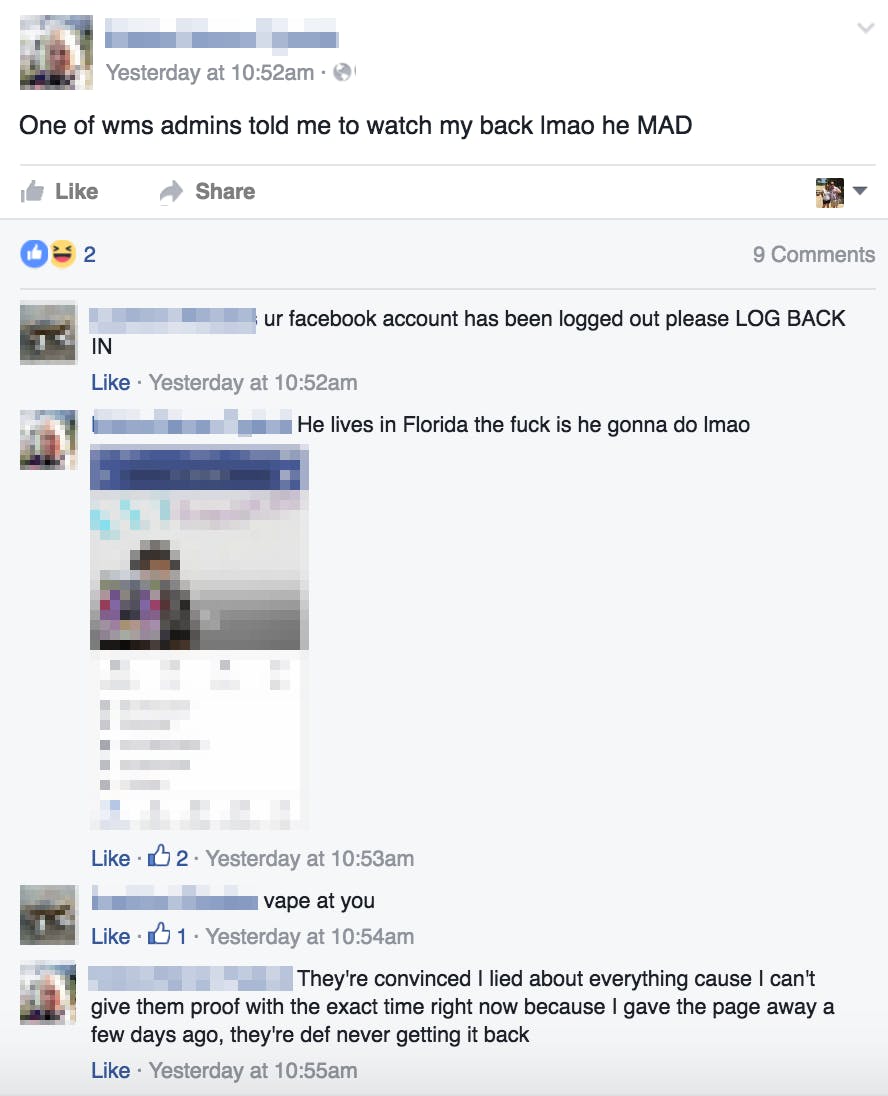 Update 1:35pm CT, July 28: According to a Facebook employee, Where my shrimps was never traditionally hacked to begin with. Rather, the page owner had added an admin who removed all others with similar permissions.

“We believe that that happened because the original page owner was offering to sell the page to this other person, which is something that’s against our policies,” the Facebook employee states. “We’re limited in what we can do in that situation because they’ve voluntarily given control to someone else.”