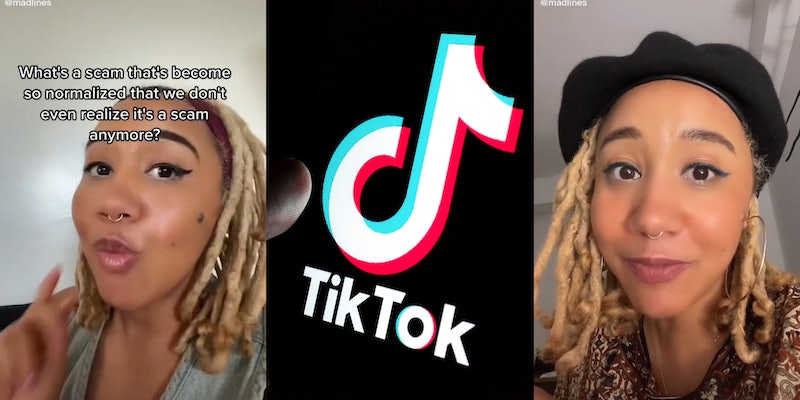 ‘It got MUTED for a reason’: ‘What’s a scam…’ creator says that TikTok muted her sound so users can’t stitch it anymore

'Millions and millions of people stitched it exposing scams and now, TikTok muted the sound.'

In a viral video, TikToker Maddy Clifford (@madlines) says TikTok muted her trending sound that called on viewers to stitch the video with exposés of different scams.

“What’s a scam that’s become so normalized that we don’t even realize it’s a scam anymore?” Clifford questions in a new video, repeating the popular original. She then urged viewers to continue to stitch the new video to expose scams. “I’ll go first. I posted a video. Millions and millions of people stitched it exposing scams and now, TikTok muted the sound so you can’t stitch it anymore. Stitch this one instead.”

In the original video posted by @debtcollective, Clifford talks about the “scam” of student loans, though the video is now muted.

“What’s a scam that’s become so normalized that we don’t even realize it’s a scam anymore?” the overlay text on the video reads.

The initial video’s comments were flooded with what viewers consider scams, including monthly subscriptions, rent increases, and paying for parking at work, among others. Additionally, Clifford’s question prompted thousands of users to stitch her video with their own critical thoughts about normalized systems one may forget to interrogate.

Another video posted by Clifford shares the story behind her claim to fame as the “What’s a scam…” girl.

She explained how she began making content for the Debt Collective, a debtor’s union, on TikTok. Once the video went viral, Clifford says started to prioritize her mental health instead of looking at the engagement on the video.

However, in the comments section of her unmuted video calling on viewers to expose scams once again, several users claimed the trend Clifford started had died. Like other popularly stitched videos, many TikTokers were tired of seeing it on their For You page.

“No let’s not it got MUTED for a reason,” one user said.

“It had a good run, a great run actually. But all good things must come to an end,” another commented.

“I appreciate you but I’ve been scrolling past that sound for the last 5 days. It’s too much. No offense nothing personal,” a third user said.

In response, Clifford notes that her only intention for the video was to prompt others to see the oppression people are put under without realizing it.

“Apparently I’ve caused a little bit of ruckus, got on some people’s nerves, or triggered folks with my ‘what’s a scam?’ question,” she says. “But nothing can be changed unless it’s faced.”

“Last thing, our love for one another is more powerful than all the systems conspiring against us,” she concludes.

The Daily Dot reached out to Clifford via TikTok comment and Instagram messaging, and TikTok via email.