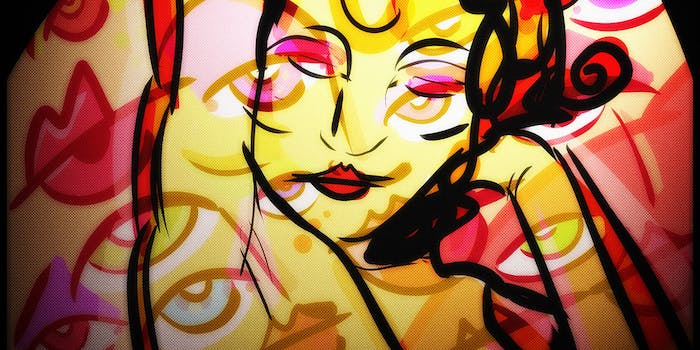 It’s a shocker, but it shouldn’t be.

There’s a particularly knotty theme that keeps working its way into my writing lately, a cultural force that assumes so many different forms in so many different realms that it took me until just now to connect them all. The issue is women’s right to set their own boundaries, and to live with the confidence that those boundaries are inherently powerful and credible, not questionable and permeable—because women are people, not passive extensions of men.

Women’s boundaries came up a month ago in the Guardian, when I wrote about a subway lothario who claimed to have gotten “over 500 dates” by pestering women who were trapped with him in an enclosed space. It came up again last week in my column about pick-up artist Julien Blanc, who was kicked out of Australia for teaching men that sexual assault is a “seduction” tactic. It’s a foundational point of my piece here at the Daily Dot about feminist social networks, in which I assert that, no, it is not women’s responsibility to weather harassment, abuse, threats, wasted time, and bad-faith devil’s advocates for the sake of civility and “discourse.” And there it is again in last week’s essay about Artie Lange’s racist, misogynist Twitter eruption, a breach of propriety that cost him at least one TV appearance—because female comics and comedy fans are no longer just eating shit and saying thank you. The notion even features prominently in this GQ piece about California’s “Yes Means Yes” bill, which can pretty much be summarized thusly: WOMEN ARE HUMAN BEINGS, DUMBASS.

Think about how Gamergate started—how all those months of mindless, churning misogynist idiocy grew out of one man’s presumption of ownership over a woman’s personal life. She didn’t behave the way his sex-thing was supposed to. And thousands of men (boys, really) online—angry at other disagreeable women like Anita Sarkeesian for threatening the sanctity of their virtual sex-things—concurred that this was an egregious breach of trust, of propriety, of “ethics.” They agreed that Zoe Quinn’s body belonged more to her boyfriend than to herself. And they exacted punishment not just on her, but on women at large.

Think about Jian Ghomeshi, Ray Rice, Bill Cosby, Donald Sterling, Christy Mack’s battered face, War Machine laughing in court, Steubenville, Maryville, Isla Vista, the celebrity nude photo hack, and in the midst of it all, Time “joking” that we should ban the word feminism. Think about Republicans referring to pregnant women as “hosts,” and arguing that if abortion is legal, men should be free to rape women. Think about all the things I couldn’t even list here, because this is a blog post, not a library.

Now tell me we don’t have a cultural block when it comes to women’s humanity.

But the public response to my writing lately has said just that. No, no, no, no, I’ve been told—women can’t just refuse to give their time to men who are being “nice.” It’s not fair for women to push back against objectification, or demand respect and representation, in media into which they’re pouring both money and emotional investment. A lot of men are sad, or lonely, or socially awkward, and they need women’s attention to feel better, or as a sounding board to practice their social skills.

A man named Chris emailed me to plead for “sympathy, not vitriol” when it comes to the men who rely on Julien Blanc’s “dating” classes:

In a recent article you posit that men are “lonely, desperate, socially inept” and “sad sacks,” but when we they try and correct that behaviour they become “repulsive, entitled, sexually aggressive creeps”. Such sweeping categorisation is blatant misandry.

No man goes out of a night worried he might be raped, sexually abused or catcalled and these are all serious instances of aberrant male behaviour that we must address, punish or discourage as a society.

The flipside of this is your average man can go out every Friday and Saturday night for five years, buy himself a drink and stand at a bar and NEVER have a woman start up a conversation with him.

… I am not equating the fear of rejection to the fear of being raped, merely pointing out that men—like most of the ones that attend Blanc’s seminars—do not do it to learn how to manipulate women, to sexually assault them or degrade them.

They do it to get a girlfriend, to have someone to hold, to find love.

Josh Barrie moaned in the Daily Telegraph that all these modern distinctions are simply too confusing for his classic Don Draper man-brain:

In a club, a man approaching a woman is a sex pest; on a train, he’s an annoying perv. On the street, he’s a weirdo. But what if he actually isn’t any of those things? What if he is just a guy who is genuinely interested, on the lookout for a possible match (not a shallow Tinder one this time)? Surely these occasions can still arise?

The brain trust over at A Voice for Men accused me of being on a “quest to kill social interaction forever,” while this Gamergate propaganda video argued that the men I was writing about “probably” had Asperger’s, and therefore I was using my platform to “vilify autism.” Cosmo ran a similar (though more measured) piece, explaining that “Men with Asperger’s are often especially honest and upfront, and want to love the whole of a person,” and complaining that “most men want to be respectful of women, but just being nice seems to get us nowhere.”

OK, guys. I hear you. Now please listen, those of you who were writing in good faith:

Treating women with respect should not be contingent on whether or not it “gets you somewhere.” Women have value even if we are too fat or too ugly or too loud or too standoffish or too homosexual to serve a “purpose” for men. Women are people.

Any person (women are people) is allowed to ignore, reject, or break up with anyone else at any time, regardless of how sad it makes them feel.

I have compassion for your social difficulties, but only to the point where they begin to impede my humanity. It isn’t women’s responsibility to bear the brunt of your loneliness, or be the means to your self-improvement. Women deal with loneliness and social anxiety and private pains too. Women deserve compassion too. If it genuinely goes without saying—as the men who write to me always claim—that you think of women as your equals, then find a solution that doesn’t hinge on exploiting women’s socialization to be passive, pliant, receptive, and kind.

“Men with Asperger’s” are not a monolith, and they certainly aren’t hardwired to harass women.

Social interaction remains fully intact, no matter how many columns I write—and, in fact, can only be improved by you treating your female conversation partners like autonomous, dynamic beings equal to yourselves.

You cannot “get” a girlfriend, because a girlfriend is not an iPad or a burrito or gonorrhea. Women are people. You aren’t entitled to “have” people, just because you think it will cure your unhappiness. Your unhappiness is your problem and no one else’s. And thinking about a girlfriend as a thing that you “get” and not an equal partner whose humanity you respect and cherish will never result in a satisfying relationship anyway.

Though Sam de Brito claimed, in the above excerpt, that he wasn’t comparing a woman being raped to a man being rejected at a bar, he literally called one the “flipside” of the other. And he’s right, in a way. When a man rapes a woman, he is violently refusing her “no.” When a man gets rejected at a bar and then seeks the advice of Julien Blanc, he is looking for a subtler, more manipulative way to get around that “no.” They are two iterations of man vs “no.”

If you’re not one of “those guys,” and you really do want to treat women like human beings, go ahead and internalize these simple truths:

1) She is more than just her physical appearance.

2) She has a complex inner life.

3) Your fulfillment is not her responsibility and your social difficulties are not her problem.

5) Her time is as valuable as yours, and it’s her right to choose how she uses it.