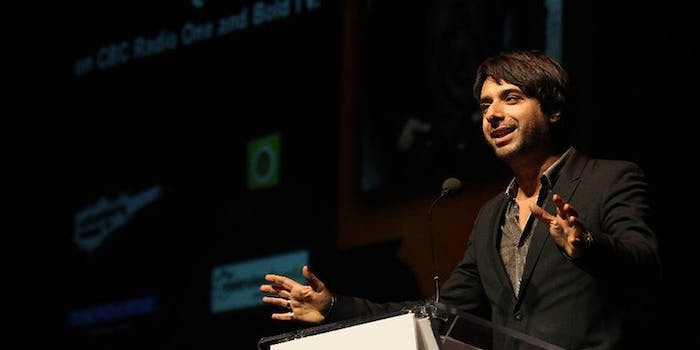 The Q host, 47, published a lengthy screed on his Facebook page, alleging that he is a victim of a smear campaign.

Broadcaster Jian Ghomeshi, host of the CBC radio show Q, was let go by the CBC Sunday with no explanation. In response, Ghomeshi published a lengthy screed on his Facebook page, alleging that he is the victim of a smear campaign by an ex-girlfriend.

The announcement that Ghomeshi and the CBC were parting ways came as a surprise to many longtime listeners. Ghomeshi, 47, cofounded the arts-and-culture program Q in 2007 and has served as host since. On Friday, he tweeted that he was taking some personal time.

CBC Head of Public Affairs Chuck Thompson said he could not disclose “terms of separation,” but that the network had received “information” about Ghomeshi that “in CBC’s judgment precludes us from continuing our relationship.”

Online, rumors spread that Ghomeshi’s firing might have been connected to allegations of sexual harassment. Hudson Hongo rounded up a few for Gawker:

After news of the firing broke, numerous Twitter users identified Ghomeshi as the subject of a 2013 xoJane essay about an unnamed Canadian celebrity with “creepy-ass moves” while another cited the radio star’s “grabby hands.”

Say “Jian Gomeshi” around any reasonably sized group of musically involved women 25-40 in Toronto and you might get a hunch about what’s up.

Media critic Jesse Brown tweeted that he’s been investigating Ghomeshi for a month now and plans to publish the results “as soon as possible.”

What I have learned about @jianghomeshi after months of investigation will be reported responsibly as soon as possible. Patience please.

Ghomeshi’s Facebook post went live a few hours after Brown’s tweet, at about 6:30pm ET. “Forgive me if what follows may be shocking to some,” he wrote. “As friends and family of mine, you are owed the truth.”

I have always been interested in a variety of activities in the bedroom but I only participate in sexual practices that are mutually agreed upon, consensual, and exciting for both partners.

About two years ago I started seeing a woman in her late 20s. Our relationship was affectionate, casual and passionate. We saw each other on and off over the period of a year and began engaging in adventurous forms of sex that included role-play, dominance and submission. We discussed our interests at length before engaging in rough sex (forms of BDSM). We talked about using safe words and regularly checked in with each other about our comfort levels. She encouraged our role-play and often was the initiator. We joked about our relations being like a mild form of Fifty Shades of Grey or a story from Lynn Coady’s Giller-Prize winning book last year. I don’t wish to get into any more detail because it is truly not anyone’s business what two consenting adults do. I have never discussed my private life before. Sexual preferences are a human right.

Ghomeshi said when he eventually ended the relationship, the woman “was upset by this and sent me messages indicating her disappointment. … After this, in the early spring there began a campaign of harassment, vengeance and demonization against me that would lead to months of anxiety.”

He continued: “Someone also began colluding with a freelance writer”—it’s rumored that this refers to Jesse Brown—“who was known not to be a fan of mine and, together, they set out to try to find corroborators to build a case to defame me.”

Ghomeshi wrote that he “voluntarily” showed CBC executives “evidence” that suggested his relationship was consensual.

CBC execs confirmed that the information provided showed that there was consent. In fact, they later said to me and my team that there is no question in their minds that there has always been consent. They said they’re not concerned about the legal side. But then they said that this type of sexual behavior was unbecoming of a prominent host on the CBC. They said that I was being dismissed for “the risk of the perception that may come from a story that could come out.” To recap, I am being fired in my prime from the show I love and built and threw myself into for years because of what I do in my private life. …

And so, with no formal allegations, no formal complaints, no complaints, not one, to the HR department at the CBC (they told us they’d done a thorough check and were satisfied), and no charges, I have lost my job based on a campaign of vengeance.

“I am still in shock,” he wrote. “But I am telling this story to you so the truth is heard. And to bring an end to the nightmare.”

Online, the reaction was mixed.

My feed is literally ALL men who “believe” @jianghomeshi and all women questioning it.

On Twitter, users advised that readers take Ghomeshi’s story with a grain of salt, and that the women accusing him deserve to be heard as well before we jump to conclusions:

Remember: Jian Ghomeshi has a powerful voice, a huge fanbase, and the resources to protect himself. The women in this story don’t.

HEY JIAN GHOMESHI: If the details to your sex life were private then HERS WERE, TOO, and your letter itself is a bunch of abusive bullshit.

I’d like to take this moment to point out that fired or not, Jian Ghomeshi is a man in power accusing a woman. And that happens a lot.

Regardless of veracity of Ghomeshi’s statement, that is a LOT of disclosure. I feel like I just saw my kindergarten teacher on the toilet.

Over the past few months the Star has approached Ghomeshi with allegations from three young women, all about 20 years his junior, who say he was physically violent to them without their consent during sexual encounters or in the lead-up to sexual encounters. Ghomeshi, through his lawyer, has said he “does not engage in non-consensual role play or sex and any suggestion of the contrary is defamatory.” …

The three women interviewed by the Star allege that Ghomeshi physically attacked them on dates without consent. They allege he struck them with a closed fist or open hand; bit them; choked them until they almost passed out; covered their nose and mouth so that they had difficulty breathing; and that they were verbally abused during and after sex.

A fourth woman, who worked at CBC, said Ghomeshi told her at work: “I want to hate f— you.”

The women refute Ghomeshi’s claim that he used “safe words” in their sexual relationship.

Another woman, who described a similar alleged attack, said that in the lead-up to their date Ghomeshi “warned me he would be aggressive.”

“I thought this meant he would want to pull my hair and have rough sex. He reassured me that I wouldn’t be forced. (Later) he attacked me. Choked me. Hit me like I didn’t know men hit women. I submitted.”

Why publish these allegations now? Because Ghomeshi is now in the public eye, writes Star editor Michael Cooke:

The reason The Star did not publish a story at that time was because there was no proof the women’s allegations of non-consensual abusive sex were true or false. They were so explosive that to print them would have been irresponsible, and would have fallen far short of the Star’s standards of accuracy and fairness.

In view of Mr. Ghomeshi’s extraordinary statement on Facebook on Sunday evening, and his high public profile in Canada, we now believe it is in the public interest to detail those allegations, which appear to have led directly to his sudden firing from the CBC.