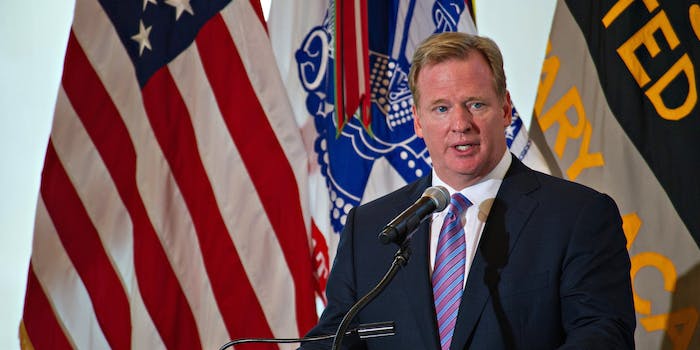 The NFL allegedly had the Ray Rice video in April

A law enforcement official sent the video of Ray Rice beating his then-fiancée Janay Palmer at the Revel Hotel and Casino to an NFL executive back in April despite the NFL’s insistence that it hasn’t seen the video until this week, the Associated Press reported.

Speaking to the AP under the condition of anonymity, a law enforcement official played a 12-second voicemail from an NFL office number dated April 9.

After thanking the official for sending the video, a female voice is heard saying, “You’re right. It’s terrible.”

The AP has seen a longer version of the video than what TMZ published, including even more disturbing details from the video.

While footage of the preceding fight wasn’t made public until Monday, TMZ originally published video showing the aftermath of a fight between Rice and his wife Feb. 15, for which he was fined $58,000 and received a two-game suspension. Rice was put into a pretrial intervention program in lieu of a trial after being charged with felony aggravated assault, but a New Jersey lawmaker is calling for that decision to be reviewed.

Hours after TMZ posted the new footage, which was provided by a former employee at the Revel, Ray was released by the Baltimore Ravens and suspended indefinitely by the NFL.

The NFL faced criticism for the lenient punishment at the time and what that decision implied about its attitude toward female fans, and many felt that Rice’s indefinite suspension was a response to the video being published in a PR move. The organization insisted that it hadn’t seen the video until this week and tried unsuccessfully to obtain a copy multiple times.

The new development completely contradicts comments NFL Commissioner Roger Goodell made to CBS News reporter Norah O’Donnell just on Tuesday, who cornered him about his decision to give Rice a lighter punishment. At the time, he told O’Donnell that he didn’t think his job was on the line.

“I will tell you that what we saw on the first videotape was troubling to us in and of itself,” Goodell said of the video. “And that’s why we took the action we took. As I’ve said before, we didn’t feel that was sufficient; we didn’t get that right. But what we saw yesterday was extremely clear, it was extremely graphic, and it was sickening.”

His comments didn’t sit well with people, and many thought he had to be lying about not seeing the video or having previous access to it.

Again: How did well-connected NFL reporters describe what was in the video if nobody with the NFL saw the video? https://t.co/1go69UfABd

The NFL has released a statement in response to the AP report, reiterating that it had not seen the video until this week.

NFL statement on AP report: ‘We have no knowledge of this.’…’We will look into it.’ pic.twitter.com/rPPxI2hu1M

This story is developing and will be updated as details emerge.