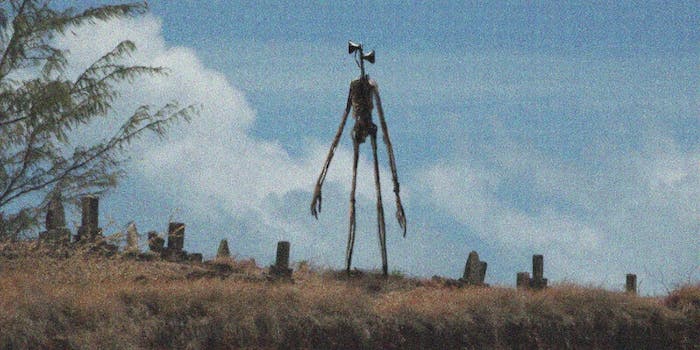 Looming over an anonymous city, a spindly figure emerges from the gloom, haunted by echoing sirens. If you’re on TikTok, you’ve almost certainly seen it: A new successor to viral creepypasta hits like Slender Man. This lil guy is called Siren Head, and he’s popping up everywhere from video game mods to Elon Musk memes.

Siren Head’s name is self-explanatory: a decaying, skeletal giant with sirens for a head. Created by illustrator Trevor Henderson, Siren Head made its first appearance in 2018, described as a lurching figure who screams random words and numbers with a buzzing, staticky voice. It’s an ingenious blend of popular horror tropes: numbers stations, creepypasta, and the kind of partially-explained cryptids you find in SCP Foundation stories.

Trevor Henderson is behind several other pieces of viral horror art, mostly in the form of photorealistic monsters that just briefly look like they could be real. They work like a jump scare with a backstory, instantly memorable and meme-able. Long Horse. . Cartoon Cat. “I love creating modern urban legends,” Henderson told the Daily Dot in an email. “And using regular every-day spaces as a way of making creature design more immediate and unsettling.”

Siren Head caught on fast, inspiring tons of fanart, an indie horror game in 2018, and a Fallout 4 mod this year. Some creepypasta-style monsters work best as urban legends, but Siren Head turned out to be an incredibly effective piece of videogame character design. First you see its distant outline in the fog. Then you start to hear the sirens. It moves slowly, but that just makes it more unnerving. You want to find meaning in its random audio clips, but there’s no way to communicate. The lack of facial features create a terrifyingly blank slate.

Trevor Henderson already had a big following among horror fans, but until recently, Siren Head’s popularity was mostly restricted to the creepypasta/SCP Foundation side of the internet. Then VFX artist Alex Howard posted a TikTok of Siren Head wandering through a city, racking up millions of views in the first week of May. His version of Siren Head is the one you’ve probably seen, a satisfyingly creepy piece of fake footage that’s perfectly suited to a 10-second clip. Since then it spread to Twitter and onto the shitposting meme corner of the internet, and the rest is history.

If your timeline is currently full of gifs of a dancing skeletal monster, you now know who to blame.