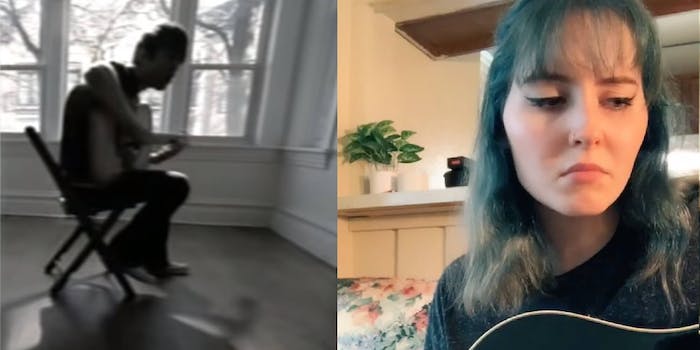 TikTok users are recreating ‘Hey There Delilah’ from her perspective

'Hey it's Delilah, checking in from New York City.'

“Hey There Delilah” by the Plain White T’s came out almost 15 years ago. The gentle, soothing guitar and heartfelt lyrics made the song an instant hit and propelled the band to almost instant popularity.

The more-than-a-decade-old song is experiencing a newfound surge in popularity thanks to a new TikTok trend. Immensely talented TikTok user @kallistarowan started the trend with a video that approached the popular 2006 track from Delilah’s point of view. The video was an instant hit, racking up 1.9 million likes and nearly 140,000 shares.

Kallistarowan’s version of the song is just as bittersweet and aching as the original, and it instantly inspired copycats. Soon, brilliantly performed renditions of the song were all over TikTok.

Many of the uploads realistically imagined some resentment on Delilah’s side. The Plain White T’s version imagines a fictional scenario in which the singer serenades his distant girlfriend from “a thousand miles away.”

In the new versions, Delilah is sometimes frustrated by this distance. Users imagined a variety of alternate, likely more realistic, scenarios of Delilah––like one who does not pine for her lover’s embrace. In many versions, a lonely Delilah sings of the distance and of a slowly building resentment between herself and her far off lover.

Another user performed a stunning but all too familiar version of her own. In hbcassidy’s version, the distance has yielded predictable results. Her musical response to a fictional, cheating boyfriend is an absolute banger.

All these heartbroken Delilah’s paint the popular song in a brand new light. And can we talk about how talented these TikTokkers are? Dozens of different renditions of the song are flooding TikTok as we speak, all from shockingly talented creators. Many carry the same discontented message, lamenting the distance and heartbreak.

Not all of the versions feature lonely, unhappy Delilahs, thankfully. A gorgeous version from lex.x0 aches for her other half.

And a second version of kallistarowan’s version is just as stunning and heartwarming as the original. This time, she adds in a breathtaking chorus to really tie the track together.