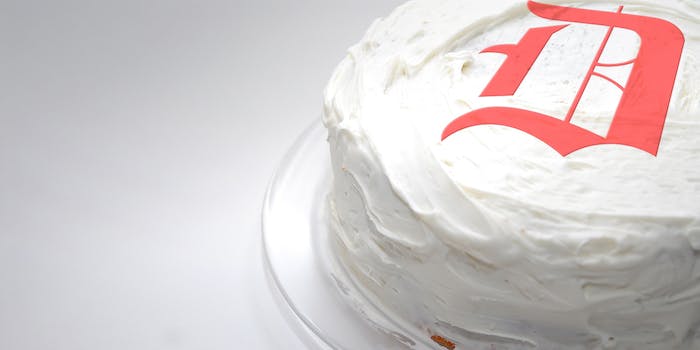 Dot Dot Dot: What starts on the Web changes the world

On the occasion of the Daily Dot's second birthday, Editor-In-Chief Nicolas White looks forward through the past

On this day in 1991, users were first able to access a new Internet service called the World Wide Web. Entirely coincidentally, the Daily Dot launched on the same date 20 years later.

I’d like to say we did it on purpose. But the Daily Dot actually launched Aug. 23 because that’s when the site was done. Come to think of it, that’s probably exactly why the World Wide Web (which had been announced on Aug. 6) launched on that day too. So while it’s purely accidental, there is a satisfying symmetry to it.

For both those reasons, it seems like as good a time as any to look back, not merely on the week but on the whole year—and that is also why my column is a day late, a fact which was, uniquely, completely intentional.

The 22nd year of the Web was the year that we learned that Koreans could rap. One of the benefits of my job (there are many) is that I saw “Gangnam Style” early—before it was an international sensation, when just a paltry few million people had viewed it.

We forget now what it was like before Psy appeared on the Today show. It was an innocent time. Watching the video for the first, and for the 100th time, filled me with joy. And do not even front with me, you loved it too.

I even made it my ringtone. But nothing can survive that level of overplay. Somewhere between the 101st and 1 millionth time that I heard it, I got over it. To be fair, it survived a lot more plays than similar phenomena in the past, like the Macarena (and now that I’ve mentioned it, I have to listen to it—enjoy that, my Spotify friends). At least the pope never did the horsey dance.

Somewhere between showing your friends a new video on YouTube during happy hour and Today, there are the hundreds of parody videos—which, in itself, is really the bigger trend. The stars don’t own their work anymore. In fact, they may not even own themselves.

Across fandom, the fans write and rewrite stories however they’d like. In cases like One Direction, they go even further, rewriting the real lives of the stars themselves. (And why shouldn’t they? The stars turned themselves into fictional characters with the first issue of People, and One Direction is a work of fiction, just like the Monkees.)

From Sterek to Larry Stylinson, and from “Somebody That I Used to Know” to “Blurred Lines,” the hits—which have now planted their flag squarely on top of the Billboard charts—are as much about the fans (who may or may not be kidding) as they are about the stars.

This phenomenon of “audience participation” has its serious side too. Consider the Boston Bombing and Reddit’s role in the aftermath.

After the tragic events at the Boston Marathon, the Internet, largely well-meaning, sprang into action, crowdsourcing hours of security footage, social media feeds, and other data to try to identify the twisted souls behind those events. After accusing several people wrongly, most users backed off the witch hunt.

But the Internet also produced a wave of volunteer emergency responders. Patton Oswalt pointed out that one of the most moving sights of the tragedy was the hundreds of people running toward the explosions, people whose first thought wasn’t to protect themselves but to find a way to protect, or at least help, others.

Thanks to the Internet, that wave rippled around the world as Internet users paid medical bills, sent money and pizzas, created maps to shelter, or offered places to stay to stranded runners.

People were as creative in finding ways to help as they are in creating parody videos. That day, we were truly a community.

What makes a country? Is it lines on a map? A capitol building? A currency?

It is utopian, built to serve the Internet’s needs and avoid the problems of “real” money. While IRL we’re watching markets crumble and nations go bankrupt, Bitcoin has made the record books. Perhaps because we trust the invisible hand of the Internet more than any government.

But the story of the cryptocurrency is not complete without the story of the “Dark Web,” the shady world of the untraceable Internet where contraband is bought and sold and where anarchy (mostly) rules. Bitcoin may be better than gold (or Apple stock) but an awful lot of it is used to buy heroin (sometimes as a prank) and guns.

The Internet’s pirate currency is not without its problems. Its growing status and link to illicit substances and products has drawn the burning, lidless eye of the United States Federal government (which may not be terribly interested in regulating its own monetary system but is quite interested in regulating others’). And if that weren’t enough, there have been more heists, crashes, and schemes just this year than in all of Ocean’s Eleven through Twenty-Five.

Speaking of scams, I’m going to go ahead and suggest a new rule of the Internet: If there is Internet, there is spam on it.

We discovered this year that even Facebook, the Internet’s great walled garden, is not exclusively cultivated by caring community gardeners. It too is being content farmed.

Quite a few of Facebook’s most active and popular pages are part of carefully orchestrated spam empires. One company in Egypt, for example, operates Dresses, which has 4.5 million likes and is one of the most talked about pages on all of Facebook. The same company operates a string of equally generic pages and the company floods them with crappy and/or copied content and cross posts, creating some amount of engagement. That inflates the sites’ edgerank, which means their flood of content hits a lot more feeds, which means more clicks, which means…

But click a link and you’re taken to a site with hundreds of ad links. If you can create enough volume, cheaply enough, there is real money to be made. So, like telemarketing and junk mail, I’m afraid it is here to stay. Dresses is not unique. Even worse, in some cases, the spammers aren’t just hoping for an ad click, they’re going to steal your bank account and take you for all you’re worth.

The scams and heists are nothing compared to the spying. Over the last few years, we’ve become increasingly aware that the apparent anonymity of the Internet is largely illusory. And in the last few months, we’ve come to learn that Big Brother truly is watching.

For all the outrage about PRISM and other government spying programs, I don’t think we actually know yet how we feel about Big Brother. We rely on Big Brother, after all. We rely on him to tell us what movies we might (actually) like or what products we “might also enjoy.”

Yet we usually forget that those conveniences come at the price of Internet services tracking us—what is ultimately, some benign spying (at least we think it’s benign). But we forget because, wired as we are, we are still not actually digital beings, and sitting at our desks or in our dens, we believe we are alone. We cannot hold on to the slippery notion that the screen we are looking at is looking back.

The Internet is many things. It is, at its most basic, a peer-to-peer network. We see that in the participatory nature of all things Internet—whether that’s parody videos of the latest hot song, help or vengeance in the wake of tragedy, or democracy itself.

At this moment in time, the Internet is also our social and cultural frontier. It will always be peer-to-peer, but it will not always be the Wild West. One day it may be civilized.

But right now it is the edge of civilization. That means it is dangerous: From scams and spying to heists and bubbles, the Internet is a perilous place.

Of course, that is partly why the Internet is exciting. But only a part.

We are still deciding what the government and the companies that create the Internet are allowed to see, to know, and to do. Celebrity is up for grabs. The biggest star in the world can be a chubby Korean this year, not a skinny white guy—and he’s not going to own his song and dance the same way that Fred Astaire owned his. We are deciding what’s content and what’s spam. We’re deciding that we can all be emergency responders and nothing is off limits. Not even the monetary system.

On the Internet, the freedom of the frontier means each and every one of us can remake ourselves—perhaps many times over. But the broader truth of the Internet is that civilization itself is being remade—and remade again. Because of the Web, the world will never be the same.