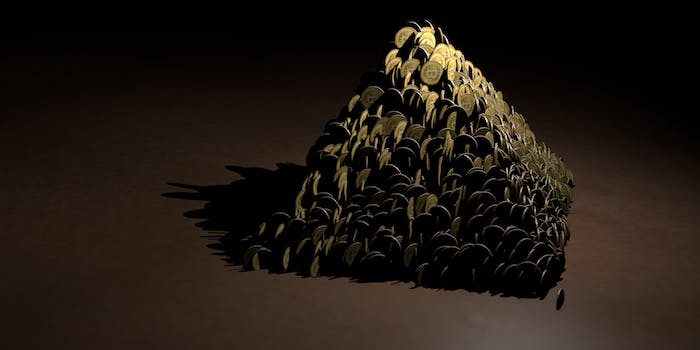 As the virtual currency grew in visibility and value in 2011 and 2012, Trendon Shavers opened an invite-only investment plan run under the name “Pirateat40.”

Trendon T. Shavers has been called the Bernie Madoff of Bitcoin. The U.S. Securities and Exchange Commision (SEC) charged him on Tuesday with defrauding investors in a Ponzi scheme worth 700,000 bitcoins, or more than $4.5 million, based on the average price of bitcoins in 2011 and 2012 when the investments were made. Today, that amount would be worth $66,910,000.

As the virtual currency grew in visibility and value in 2011 and 2012, Shavers opened the Bitcoin Savings & Trust (BTCST) in November 2011, an invite-only investment plan run under the name “Pirateat40.” The plan promised an alternating variety of big gains, including a 1 percent daily return and a 7 percent weekly return on deposits of more than 25,000 bitcoins “based on BTCST’s Bitcoin market arbitrage activity, which supposedly included selling to individuals who wished to buy Bitcoin “off the radar” in quick fashion or large quantities,” according to the SEC. Shavers refused to reveal the methods behind the incredible return.

“If I told you then I couldn’t do what I do,” pirateat40 once wrote.

Although BTCST’s lofty promises immediately provoked suspicion, it also attracted no small number of investors. Shavers gained investors across the United States and around the globe. He used BitcoinTalk.org to advertise for the fund as well as to brag about its success.

“It’s growing, it’s growing!” Shavers, who resides in McKinney, Texas, wrote. Messages such as “I have yet to come close to taking a loss on any deal” and “risk is almost 0” led investors to believe that BTCST was strong.

In August 2012, nine months after BTCST began, Pirateat40 announced the company’s closure, claiming that the fund was so successful and had grown so large that shutting it down was the only move to make. He promised to transfer bitcoins to their owners within a week. In conversations with investors, he claimed that BTCST was sitting on over 500,000 bitcoins, or $5.6 million at August 2012 prices, reported the Verge. As the weeks went by without any payout, his investors, the media, and the Bitcoin community agreed that a huge scheme had been pulled off. Some investors began hunting for Pirateat40’s real identity.

The SEC claims that Shavers paid out a total of 507,148 bitcoins to investors in withdrawals and interest payments throughout the duration of the scheme. They also say he took 150,000 coins to his personal account and realized $164,758 of profits when he sold 86,202 bitcoins. He allegedly transferred the money to an online payment processor and his own personal checking account, from which he used it to pay his rent, utilities, car-related expenses, food, retail purchases, and gambling.

The SEC seeks to freeze Shavers assets as well as issuing permanent injunctions, relieving him of “ill-gotten gains with prejudgement interest” and financial penalties.

This story mirrors many other major and minor Ponzi schemes run online and off- over the years.

“Ponzi scheme operators often claim to have a tie to a new and emerging technology as a lure to potential victims,” said Lori J. Schock, Director of the SEC’s Office of Investor Education and Advocacy. “Investors should understand that regardless of the type of investment, a promise of high returns with little or no risk is a classic warning sign of fraud.”

Scammers often enter communities surrounding new technology, make opaque claims about tremendous returns on investments, and take advantage of potential investors’ fatal combination of ignorance and excitement surrounding that technology. They take initial investments, claim success, and use new investments to pay off previous investors. They continue to claim further success, fueling more investment. After all, it’s called a con because it’s based on confidence. Earlier this year, a Turkish scammer ran a similar scheme to the tune of over $300,000 in a community based on search engine optimization. He has not been caught or punished.

“Fraudsters are not beyond the reach of the SEC just because they use Bitcoin or another virtual currency to mislead investors and violate the federal securities laws,” said Andrew M. Calamari, director of the SEC’s New York regional office. “Shavers preyed on investors in an online forum by claiming his investments carried no risk and huge profits for them while his true intentions were rooted in nothing more than personal greed.”

The SEC issued an alert today warning investors about the dangers of potential investment scams involving virtual currencies promoted through the Internet.