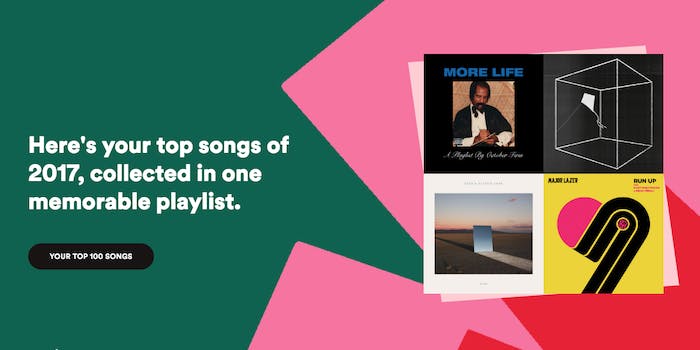 What was your song of the year? Spotify’s Wrapped feature knows

Spotify announced Tuesday that its annual Wrapped playlist feature has gone live, which means that as long as you have an account, you now have access to data the streaming service has been tracking for all of 2017. Think you know how many hours you spent listening to “Wild Thoughts” on your commute, or how many new artists you checked out? Think again.

The feature also quizzes you on low-key surprising stats about your listening habits. My song of the year ended up being “Madiba Riddim,” a random mid-album track off Drake’s most recent LP that I would describe as “average” but which I also apparently never skip when it shuffles onto my day-to-day playlist. Would I ever describe it as my favorite song? No. And yet the data speaks for itself. Apparently, without realizing it, I stan for Drake.

In an era when people are meticulously curating their feeds to present more fun, cooler versions of their lives, Wrapped is the ultimate dox—outing you for the complex organism you are. It is fun to contain multitudes.

Spotify also released its Year in Music lists earlier today. Ed Sheeran was the platform’s most streamed artist globally in 2017 with 47 million monthly listeners, while his latest album was played an unreal 3.1 billion times. Both hip-hop and Latin music saw bigger numbers than ever before, with “Despacito—Remix” by Luis Fonsi and Daddy Yankee being named Spotify’s “Song of the Summer.”

To check out your playlist, head to 2017wrapped.com.